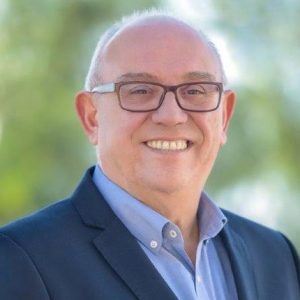 In this article, Piedad Coscollá (current Marketing Manager at Anecoop) and Paco Borrás (who was the organisation’s former Sales Manager for 35 years) give a detailed history of the birth and development of the seedless watermelon Bouquet 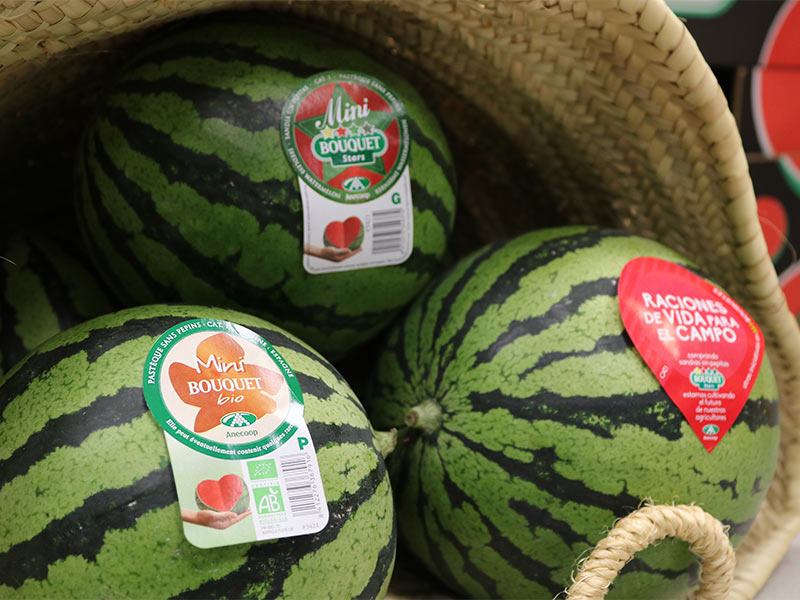 This milestone, which happened three decades ago, changed the eating concept for this fruit for evermore. It did not have an easy beginning, but Anecoop participated significantly in its development and started a trend for all those that followed in its wake.

Today, any watermelon brand worth its salt follows the parameters of the visionaries who in the 1970s realised that the obstacles to be overcome to increase consumption lay, without any doubt, in two parameters: the difficulty of eating the tasty flesh with so many seeds, and the actual size of the product.

Current consumption would not be possible without the appearance of the so-called seedless watermelons (agronomically speaking, triploids). The German market, with its traditional rigidity, compelled us to change the word “seedless” for the German word “kernarm” (poor in seeds) and it has to be said that they were right from a literal point of view; still, consumers were sold on the idea and today this fruit is known as seedless watermelon.

In Spain, Mexico, Italy, USA, Guatemala, Brazil and Honduras, the ‘seedless’ figures are clearly dominant overall, but in other countries such as China, Turkey or India, which are the top three producers in the world, there is a deep-rooted local consumption of traditional watermelons with seeds.

Spain: 20% of the operations worldwide

Spanish watermelon exports had always been below melon exports, until 2008; but from this date onwards they took off in a spectacular manner, managing to double the melon figures. This trend is due, without any doubt, to the introduction of the seedless watermelon, Bouquet.

The history of Bouquet

At the end of the 1970s, several breeder companies obtained the first seedless varieties, but Petoseed, with the variety that would subsequently be called Reina de Corazones, was the first one to set down the guidelines on the European market.

In spite of this, Petoseed, made a mistake: it decided to develop the variety in a comprehensive way, from production to consumer. The operation consisted of developing a label with the idea of intervening with the producers, to whom they offered the payment of 5 pesetas per kilo (0.03 €) above the price of watermelons with seeds. The initiative did not take off.

At that time, a ‘small cooperative, Anecoop’, which had led the way and gained respect in the citrus fruit export sector, started to see a Spain with international extensions and that covered other types of crops.

In 1986, the recently created Production and Development Department started experimenting with different seedless varieties. Very soon, the possibilities of Reina de Corazones stood out and part of the reason for Petoseed’s failure came to light. The problem lay in the low germination: a determining factor for the rejection by the farmers who had been sold the seeds by Petoseed. The classic germination system that they used had not managed to reach optimal levels to make up for the cost of the seed.

The technicians from Anecoop, with José María Torres at their head, along with Marcos Romeu, resolved the problem using methods that were already being employed with other types of seed and using grafting onto pumpkins. This was the key moment and the start of the success story of the seedless watermelon. Petoseed still had time to develop the possibilities of Reina de Corazones, which held a privileged position for several years, until research by other seed companies improved the variety and Reina de Corazones became history, along with many others.

In 1989, a series of cooperatives from Almeria joined Anecoop and the Valencian organisation opened an office in Roquetas de Mar, Almeria. Furthermore, Manolo Navarro joined as the Manager of Anecoop France. The end of the summer of 1990 was another key moment for the start-up of a serious project based on Seedless Watermelon and, in particular, on Reina de Corazones.

At that time, watermelons were produced without any brands, with independent campaigns in each production area. Greenhouse crops from Almeria started the campaign and, when this finished at the end of June, it passed Murcia by (devoted to melons), moving on to the Valencia region, and it ended in August with a few plantations in La Mancha. Basically, generic cardboard boxes and pallets were used, along with a great deal of loose product direct from the fields. The potential was there, but the work still had to be done.

The marketing of Bouquet

To revolutionise the category, a specific brand was chosen: Bouquet, with a comprehensive differentiating strategy for the product, which started with its own boxes.

Anecoop planned a planting calendar for all the producing regions, managing the delivery of the plants and the production from day one. This meant the creation of a strict system for the entire production, which, in the beginning, was only sold through Anecoop.

In 1991, the first sales trials were carried out in Europe. And following their success, in 1992, stable marketing programmes were initiated. During these two first campaigns, 1,689 Tm and 5,356 Tm were marketed respectively, and the investment in marketing rose to 6% of the total value of the sales.

Anecoop gained confidence in the product and decided to make a special marketing effort which, in 1993, made up 38% of the value of the sales, and in the summer of 1994, over 20,000 Tm were marketed.

The minis by Syngenta

From the very beginning, we knew that a size that was larger than 3 kilos was difficult to manage due to the considerable increase in smaller families.

The hybrid growers were also following this trend, making efforts to find smaller-sized varieties themselves, not only as the fruit at the end of the plant’s life that never had the quality characteristic of the variety. At this point, Syngenta arrived with its minis, which between 2002 and 2004, developed seedless watermelon varieties with stripes on the outside, but true minis and with good flavour.

But the multinational made the same mistake as Petoseed with Reina de Corazones. It wanted to develop the product including all the areas: the seed, the production, the brand, the sales, the negotiation with supermarkets, the marketing, etc.

They forced Anecoop to form a partnership with Peviani in Italy and made us take on a joint brand, Solinda, with an important investment to find the brand name. And later on, there were long marketing and programming meetings, where we used up all our energy, which at the time should have been concentrated on implementing the production and positioning the new watermelon on the market.

Syngenta’s aim was to consolidate a new brand that managed to identify mini watermelons with the name, but it soon became obvious that other companies were already taking off with very similar varieties. In the end, Syngenta decided to go back to square one and remain as a great breeding company of good seeds, leaving the production and sales areas in the hands of marketing companies such as Anecoop.

Today the mini watermelon is just one variety within the Bouquet Watermelon range, with a good market niche and positioning.

An incredible job by the Development Department

From 1987 to 1990, Anecoop tested 26 different varieties of seedless watermelons until deciding on Reina de Corazones.

At that time, the strategic decision was made to choose a striped-skinned variety, similar to the historic Crimson, striped with many seeds and the large oval-shaped watermelons, also with many seeds, and in order to differentiate them from the local watermelons and from the export produce, which during those years were completely black on the outside. Due to the risk of confusing it with a Crimson watermelon, we preferred it to be easily distinguished from the black seeded variety. And this was the right decision, because it allowed us to be easily identified both on the Spanish and on the export market.

As of today, they continue testing over 25 new or classic varieties every year and the department has already tested well over 1,000 different watermelon varieties.

The wake left by Bouquet

Following the Bouquet model, other initiatives appeared, concentrating on seedless watermelons, either individually or in groups, but based on obtaining a brand and quality positioning that had nothing to do with the previous, classic watermelon image. Fashion belonging to a group of companies, Negra from Caparros, Reina from Casi, along with others, contributed to consolidating the progress of seedless watermelons, causing a significant increase in general watermelon production in Spain. At the beginning of the 1980s, there was a production of 500,000 Tm and this has now reached 1,200,000 Tm. This growth became consolidated because exports rose from 60,000 Tm in 1980 to 900,000 Tm at present.

However, Spanish national consumption has remained constant, with a figure of around 8 kilos per capita and, therefore, the Spanish market is the first stronghold that we should look after.

Leaders have always found it difficult to keep their position, because the competition follows them, imitates them and, even at times, improves what they are doing, and part of the market can always be snatched away from them. At other times, the distribution strategy itself can have an influence, because the supermarkets do not like there to be clear leaders in specific products.

Over all these years, Anecoop has carried out many marketing campaigns and has continued investing in advertising and communication, with the clear aim of making the values existing in the Bouquet brand more visible. And as is normal, when an investment is made, the development of consumption also spreads the benefit to those who are not investing, but this is inevitable and if we were to stop due to this reason, we would not improve consumer awareness.

At present, Anecoop’s calendar goes from the end of April until the end of September, with 18 cooperatives that are located all over the Spanish mainland and cover all the production areas.

Today’s calendar has nothing to do with the one from the first years, where 80% of the production was in Almeria and Valencia and 20% in Alicante. Production from Murcia during these first years was concentrated in Campo de Cartagena.

Now, the 150,000 Tm marketed by Anecoop differ greatly geographically-speaking. The province of Almeria, both in its area of greenhouses and in the open-air regions of Pulpí and Palomares, and the Alto Guadalentin, in Murcia represent 85% of the total production, with this percentage being divided up into similar parts. Valencia and Castellon have kept 10% and Ciudad Real covers the ends of the campaign.

This year marks the 30th anniversary of the history of the seedless watermelon, Bouquet. This fact has become part of agronomical innovation history, to which is added the knowledge and know-how of a series of people who, led by José María Planells, knew how to see the great possibilities of turning a humble product into something as serious as is today’s global watermelon scenario.