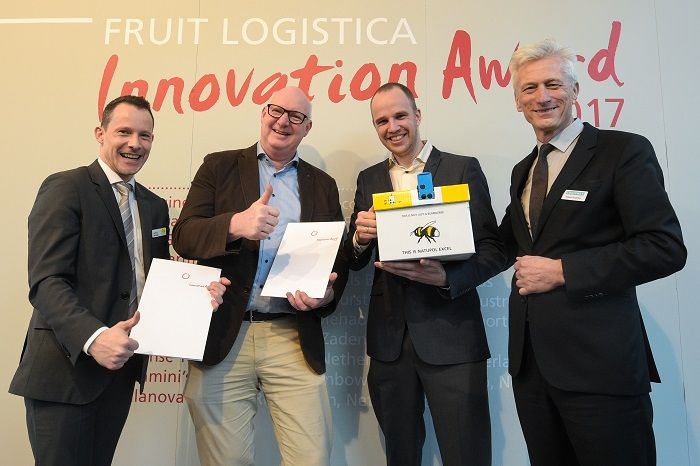 More than 70,000 trade visitors from 130 countries had the opportunity to cast their votes for the most ‘outstanding innovation’ during the Fruit Logistica Fair held on 8 and 9 February. A panel of experts from all levels of the fresh produce trade selected the ten nominees from over 60 submissions. The winner of the award was Rijk Zwaan, who won the award for Knox™, a trait which reduces pinking in lettuce after cutting.

Speaking at the award ceremony, the company’s Product Manager Pollination, Remco Huvermann, said the discovery that bumblebees saw differently to humans enabled Koppert’s R&D department to develop ‘Beevision’ – colour cues that conform to the bumblebees own visual spectrum. He said the strategically placed cues optimized the visibility of the hive and led to improved pollination results.

Koppert’s R&D Department has spent the last 26 years developing its commercial hives. The company is currently celebrating its 50th anniversary in biocontrol activities in horticulture and agriculture.

The innovation award is presented each year for ‘outstanding innovation’ in the fresh produce sector. Innovations include products, services or technical developments. The competition is organized by Messe Berlin and Fruchthandel magazine.

Through the eyes of a bumblebee

Research has shown that bumblebees have orientation problems when daylight is reduced by factors such as the use of artificial light during the darkest months of the year or extra layers of poly covers. The ‘beevision’ features on the Natupol Excel hives have been designed to help bumblebees navigate in these and other unfavourable conditions.

‘Introducing colours and changes in the print in special coatings on the Natupol hives, helps bumblebees to find their way back to their nest box faster,’ explains Koppert’s Pollination Product Manager, Remco Huvermann. ‘The innovation means that bumblebees use less energy for finding the hive in the crop and have more energy to spend on effective pollination. The cues obviously play an even more important role when light conditions are not optimal.’

‘We launched the product at the end of last year and have been pleased with the attention it has been getting from the media, and more importantly from our customers on the ground. Winning this prize will help us to distinguish ourselves from the competition in the field of commercial pollination,’ Huvermann concluded.