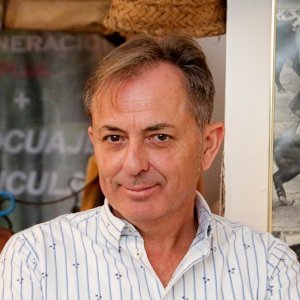 Vicente Puchol (50 years old, Foios, Valencia) finds it very difficult to smile; however, he is an eloquent, enlightening man, a volcano of words. I had met him before at a conference and his scientific knowledge did not let me down.

In the farmyard around his house there was always bullfighting paraphernalia to play with. His father, in addition to cropland, had beef cows, along with horses. The bullfighter ‘El Soro’ is like a brother to him. In fact, the ‘maestro’s’ belonging are on display in one of the houses belonging to Vicente’s family, as a sort of museum.

Our meeting took place between this house and an equestrian centre in the Sierra Calderona, where he rode a German sport horse.

He lives in the country, without a television and he represents the sixth generation of a Valencian farming family. Perhaps for this reason, he collects old farming utensils and he has several horse-drawn carriages and gigs from the 19th century.

You have El Soro’s bullfighting hat at home, have you ever tried it on and looked in a mirror?

It wouldn’t occur to me. The bullfighting hat is sacred and it would mean taking on a place that is not mine. Only the maestro can wear it.

Can you understand that there are people who don’t like bullfighting?

Of course, and I respect their ideas.

Don’t you think that people should think about the animal’s suffering while they torment it and make it bleed until it is stabbed with the bullfighter’s sword?

Fighting bulls are fierce animals, genetically bred to charge and from four years’ old in the fields they kill each other to gain the hierarchy of the herd. Their breeding, on the large open fields, gives farmers the income to be able to prune their Holm oaks, remove mastic trees, conserve the environment and prevent climate change.

Joaquín Vidal, one of the best bullfighting critics, maintained that the bulls that fell in the bullring had been genetically manipulated. What is your opinion on this point?

Livestock farmers look for the best crosses and I wouldn’t call this genetic manipulation; at the most it could be consanguinity.

Where do you get your passion for the world of bullfighting and for horses?

My father was a great fan, so I experienced it as something very natural from a very young age. My village is deeply-rooted in the local festivals, not just bullfighting, but also bull running. In the Valencian Community there are almost 10,000 bullfighting events a year and just in Foios alone we have four bullfighters: Vicente Ruíz ‘El Soro’, his brother Antonio, Rafael de Foios and Raúl Martí.

Have you had any frights?

Yes, more than one. On a farm belonging to Álvaro Domecq in Cadiz, we recovered some pastureland and one weekend, when I was in Seville, I decided to take advantage of the trip. It was a Saturday afternoon and, so as not to disturb the family, I parked the car on the side of the road, I opened a gate and walked over to a wheat field. I discovered that between the crop and the fence there was a barrier and suddenly I started to hear a sound that got faster by the minute; I turned round and saw around 50 to 60 animals racing towards me. I lay down in the wheat and crawled towards a track made by a tractor. I stayed there for several hours without moving, with my tablet and my telephone turned off. When it started to get dark I saw the backs of the animals start moving towards the hill opposite me. I realised that the animals were going back to their sleeping place and I could leave.

Which bulls do you think are the best today and who is your favourite bullfighter?

At present I like the bulls from the Torrestrella breeding farm, and as a working bullfighter, Paco Ureña. But for me, the best bullfighter of all times was El Soro, due to his creativity and charisma, although the father of today’s bullfighting is Juan Belmonte. He found the optimum distance between the bullfighting cape and the bull to give the animal the right rhythm and pace. He was the generator of the art of bullfighting’s aesthetic plasticity.

And from bulls to horses, it would seem there is only a short step. Is this why you like horses?

In order to handle a bull in the fields, you need the help of a horse. If not, it is impossible to lead the herd. It was the village people who decided to fight bulls on foot.

I suppose, as with bullfighting, the family environment had an important influence on my love of the equestrian world.

Also, horses are very simple animals if you manage to get into step with them. You can’t ask horses to do anything without warning them first, but they have very long memories.

Do you own any horses?

I have a mare that I bought in France. She is a sport mule, the daughter of a French riding horse. In spite of being a mule, she has a great sporting attitude due to her mother’s genetics, who was a purebred sport horse and when I ride her, she has many different capabilities.

I would like to have at least two animals, but there are months when I am not at home for almost four weeks and someone has to look after the animals for me.

Do you eat horse meat?

Yes, courtesy and valour are not mutually exclusive. And I also eat bull meat.

And did you not think of becoming a vet instead of devoting your life to plant pathology?

No, never. I love understanding the physiological processes of the plants and finding out the reason behind the cause when there are alterations in the vegetable behaviour.

I´ve been told that you have an incredible memory and that you remember the oranges in a field in the same way that I can remember a face.

Yes, it’s true. I recognise the trees on a plot of land; I remember their development and their physiological attitude.

I call this passion for your work.

I am completely happy working, which is why I work for 16 hours a day and I don’t even notice.

With these working hours, there must be days when you only have time for working and sleeping.

No, believe it or not I always find a while to read and learn about things that interest me.