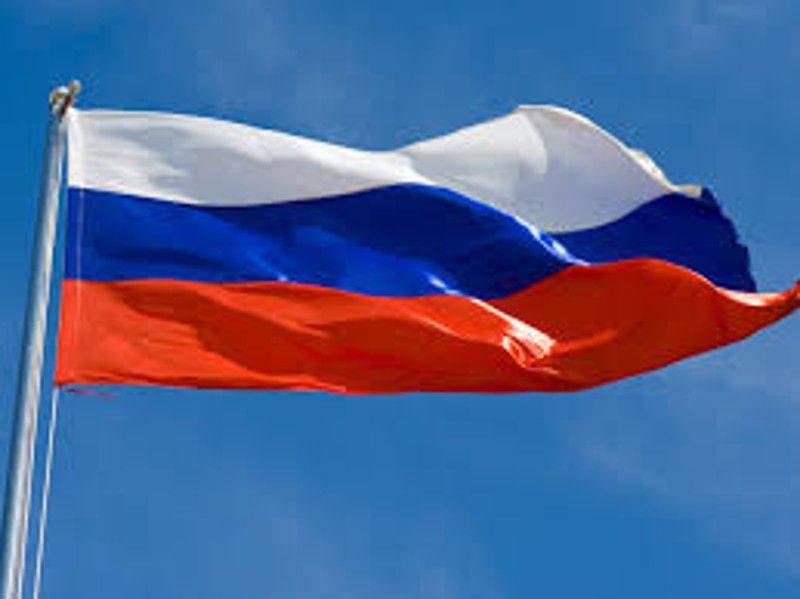 What will the new distribution of these trade flows be like? Will the European markets experience a surplus of offer over the next few months? Which countries are worst affected by the new war crisis? How long will it last?

The European economy is at the mercy of the war. Germany and Italy are its energy hostages, but the consequences are raiding every economic activity, with no end in sight. And of course, it fully impinges on the agrifood system and on its trade flows.

The Russian market used to absorb around 9.5 million tonnes of fruit and vegetables. Where will this immense volume go now? The situation has started to have a commercial impact on the European markets. On the Cologne and Paris wholesale markets, an important flow of goods from Turkey can already be seen.

The impact of the invasion of Ukraine and the Russian isolation from the western world also affects other types of transactions such as insurance policies, bottlenecks in the ports and the re-directing of ships, increasing prices, the impossibility of payments or flourishing of mafia groups, which will be able to have a field day.

The financial restrictions, the exit of international Banks and the cancelling of the Swift payment system have caused a rapid depreciation of the Rouble, a situation that has jeopardised any commercial transaction with the Asian giant.

The effects will not be the same for the agrifood industry as a whole and there will be products such as plantains from Ecuador or citrus fruit that will suffer the consequences of the conflict more. “If we are talking about a surplus of any products, it means that it will have a general impact on other fruits. Therefore, no fruit and vegetables are excluded from the events that occur in the short or medium term,” explains Phillipe Binard, the General Secretary of Freshfel.

Europe, sadly, already has experience regarding embargos in this geographical area, the last of them affecting the Belarusian market at the beginning of the year, which has caused an important upheaval in the Dutch pear trade. But the one that wreaked most havoc was imposed by Putin on European fruit and vegetables in 2014, after his annexation of Crimea. The Algerian market was also closed in 2016, which caused important losses for the Catalan apple exporters.

The Russian embargo meant losses of around 7.5 billion euros of which 2/3 corresponded to Europe and of this amount 50% was absorbed by the fruit and vegetable sector. “This means a huge burden from which we have yet to recover. I don’t understand why fruit and vegetables always bear the brunt of world geopolitics.” 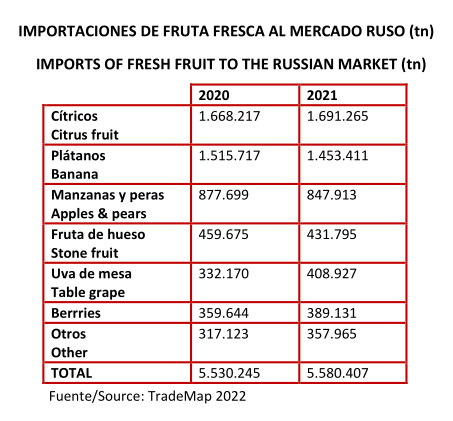 The most immediate consequences

The possibility that suppliers who previously sent their produce to Russia, Belarus and Ukraine might think about re-directing their volumes towards the EU market is already on the table and it will not be a short-lived situation, rather it could last months. “The floating goods that could be diverted to Europe without set clients and that could bring the prices down on the market will have to be monitored.”

Maritime transport, which is still suffering from the disruptions caused by the pandemic, could be affected even more owing to the fact that the main shipping companies cannot reach the ports in the Baltic or the Black Sea.

The war has also meant an important impact on the price of fertilisers and on the price of the wood used for pallets, which come from the Belarusian and Russian forests.

The distortions could even be due to the lack of labour, particularly Ukrainian, who work on seasonal jobs in many European countries. Added to this are the transport problems, which rely on Ukrainian drivers when there are labour shortages.

The impact on Turkey

Turkey, a country that is politically ambiguous, is one of the main suppliers of fruit and vegetables to Russia, with a volume that reaches 1.8 million tonnes. At present, the country is in full season and its different fruit and vegetables area already increasing the volumes on the wholesale markets in central Europe and Italy.

Turkey is also one of the largest world producers of cherries and it has a considerable production of stone fruit which, when faced with the impossibility of selling in Russia, could be diverted towards western countries.

Egypt placed almost 500,000 tonnes on the Russian, Ukrainian and Belarusian markets, of which 400,000 went entirely to the Russian market. Its main product was citrus fruit. As they cannot sell their produce there, it is very likely that they will start looking towards the more western markets and establish greater competition based on lower prices with Spanish orange exporters. The Egyptian grape campaign starts a month before the one in Murcia and nobody knows where these volumes will be sold.

Poland is the largest European apple producer and it is suffering serious problems owing to the significant production this year. The closure of the Belarusian border at the beginning of the year was a severe setback for trade and now there is also the impossibility of selling to Ukraine. The situation is so serious that, in order to improve the situation, the Polish government has removed VAT from the produce, although the problems are persisting. Accordingly, at Freshfel Europe, the need for a selective withdrawal plan through producer organisations is being supported. One of the ideas is that this withdrawal of fruit could be used to feed Ukrainian refugees.

Every week Ecuador sent approximately 1.8 million boxes of plantains to Russian and 180,000 boxes to Ukraine. This trade has been suddenly cut off, causing the loss of 300,000 jobs in the country.

The exporting countries from the southern hemisphere are suffering from serious difficulties as some of them, such as South Africa, Argentina, Chile or Peru have a significant market in Russia. The dates for their counter season imports of grapes, citrus fruit are approaching… and the difficulties are looming.

At present, nobody knows which direction these goods will take, which could generate a surplus the like of which has never been seen before in European countries. However, everything is pointing towards the fact that caution in the shipments will be the key factor. In South America they are also facing a difficult situation derived from the increase in energy and input prices. But the greatest difficulty to be overcome is the increase in the prices of freight shipping. “Reaching a Europe that is flooded with produce, after paying exorbitant freight prices does not seem to be the most profitable business, as many companies have already reached their limit. They are looking for solutions, but at the moment, they are only finding provisional options, such as fruit to be used in industry.”

Accordingly, the most recent case is Argentina, which has conclusively stopped its apple and pear exports.

South Africa sold Russia around 11.2 million boxes of citrus fruit (each box contains 15 kilos) in 2021. The impact of the war has already been seen in this southern country, which has not been able to send any shipments for the past three weeks, particularly of lemons. There is no sign that the situation will improve, as in April they also start the mandarin and grapefruit season. Grape exports have also been affected due to the problems at the ports and delays of 56 day compared to the 24 days of a standard shipment.

The Citrus Growers Association has also shown its concern regarding a possible oversupply on the European market. With all this, the South African lobby has requested its Government to intensify its efforts to gain access to new markets and to be able to diversify its exports. The situation of the ports is worsening, if possible, the export conditions. A maritime transit that used to take 24 days has now turned into 90 days, an unsustainable situation with perishable goods. The rising price of fuel, of fertilisers and other inputs are also weakening the country.

What can Europe do regarding this situation?

The seriousness of the situation is such that Brussels has hastened to start up a Food Safety Committee with resources from the Crisis Reserve (endowed with 500 million euros) and funding by the Member States with 1,000 million euros. The sum of both amounts must reach the agricultural and livestock sectors. The Committee has established an agenda for working on the most problematic aspects and it even intends to revalue the goals of the European Green New Deal and the From Farm to Fork strategy.

On the one hand, the flexibilisation of the American cereal import regulations has been put on the table. On the other, the problem of plant protection controls must be tackled, such as chlorpyrifos, a substance that is not allowed in Europe and with which Turkish imports regularly raise the alarm.

Should Europe move towards food sovereignty?

The war has turned the European 2030 goals upside down. On this date, 25% of the cultivated surface area should be used for ecological crops, but this issue is causing a serious debate, as ecological production makes productivity between 10% and 15% more expensive. At the other end of the scale, the idea that the 10% of land that is fallow should be used to grow cereals is under debate.

Tackling the European food problem even involves creating demagogic policies such as the one by the Hungarian Prime Minister Orban, who has launched a defiant proposal to the Commission proposing closing its borders so that Hungarian productions remain within the country.

“There is an unavoidable question that must be clarified and that is how to feed the entire European population. On the one hand, we are suffering from the disruption of the chain due to the shortage of cereals and on the other, we could find an excess in the supply in Europe and have to start up withdrawal mechanisms in order to not drown the markets,” the General Manager of Freshfel comments.

PrevWhy don’t we export outside Europe?
“The Food Chain Law is not being applied”Next
YOU COULD ALSO BE INTERESTED IN 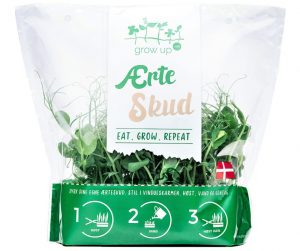 Nominated for the 2022 FLIA Awards