The Princesa Amandine project was born three years ago; therefore, the circumstances surrounding its development have not been the best. However, in spite of this, it has achieved a continuous, progressive consolidation. 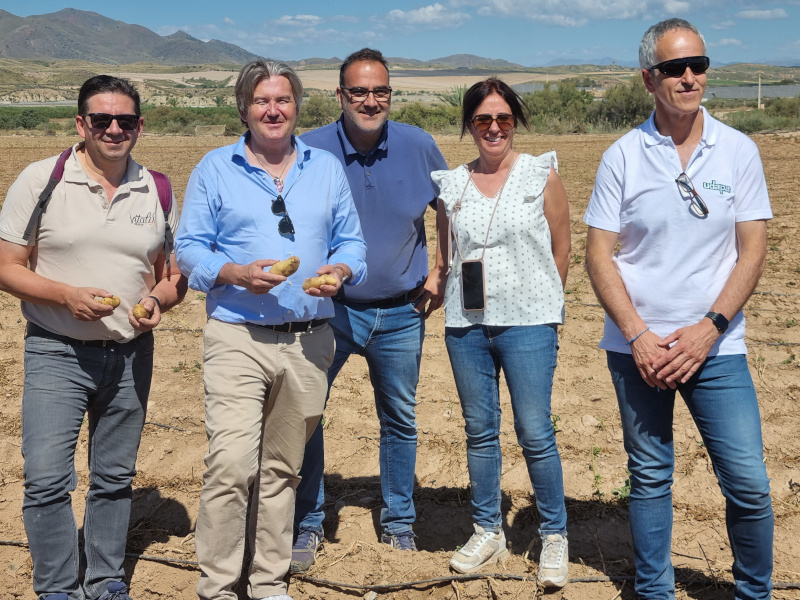 This plan, unique in its category, is integrated by Ibérica de Patatas, El Zamorano, Udapa and the Portuguese company Campotec, brought together by a joint marketing commitment for the Amandine variety from Germicopa, under the brand “Princesa Amandine”, as well as its supply twelve months a year.

One of the project’s goals, which bring together companies which, theoretically, should be competing with each other, is permanent collaboration, a new view for the business world. Added to this business paradigm is the two-way business, between ‘Amandine Francia’ and ‘Amandine España’. In this way, to guarantee that there is produce available on the supermarket shelves of both countries, Spain can supply France during the months of May and June, and our neighbour will supply goods to the Spanish market in the winter months.

The figures back this up. On the Iberian Mainland, the variety has tripled its surface area in just two years. Production started in 2020 with an initial crop surface area of 40 hectares. In 2021, this figure reached 80 ha, and in 2022 it is around 120 ha. In line with these figures, the volume has been increasing up to this year’s 5,000 tonnes. “The next expansion plan will include areas in the province of Alava to achieve a complementary nature of seasons, from the earliest potatoes to the latest ones,” Jean Michel Beranguer, the Manager in Spain, explains.

Currently, the Princesa Amandine crop spreads through the provinces of Seville, Murcia and Valladolid in Spain, and Siveria Torres in Portugal.

In France, the idea is to reach a production of 60,000 tonnes and to lead the firm white flesh segment. The production areas are spread out geographically, including the Camargue, Provence, Bretagne, the Saône Valley, Beauce and northern Picardy. The overall surface area is around 2,300 hectares.

In France, the association includes 10 commercial operators, aimed at strengthening the value perceived by consumers, but also the distributor’s profitability. Amongst the main French operators the following stand out: Pom’ Alliance, Négonor, les 3 Laboureurs and Terrea.

Origin, traceability and respect for the environment

Amandine is the result of a cross of the Charlotte and Marianna varieties, created by the seed company Germicopa in the 1980s, which materialised in a variety that is stable all year round. It is a potato with firm, white flesh, low-calorie content and with an elongated shape. “It is a product that responds very well for city dwellers, who are concerned about their health and see a healthy way of eating in “Princesa Amadine” as it is suitable for microwaving and in salads, with very low calorie values: 80 kilocalories per 100 grams.

The contract framework for Princesa Amandine includes a very precise table of product specifications, with certified protocols and regular controls, which guarantee the product quality until it reaches the shopping centres, as well as the traceability of the batches from the field to the plate. The potatoes meet some specifications which are even stricter than the normal regulation. (AFnor NF V25111).

The centre of the Amandine Association is characterised by upholding a very responsible culture of environmentally friendly values and equality amongst workers, with strict surveillance on all the production processes.

Presence in the distribution

In the brand’s expansion and consolidation, the association has signed a co-branding agreement with the distribution chain DIA. The eye-catching design of its bag will also be marked with an upper band in black and the chain’s name.

The brand is also present in Alcampo, Ahorramás, Eroski, Carrefour, El Corte Inglés, Dia and Lidl, as well as the Consum chain (in Catalonia) and the regional supermarkets of Lupa (in Cantabria, Castilla y León and La Rioja). It can also be found in Hiper Usera in Madrid. According to the executive, “part of our strategy involves acquiring penetration in regional supermarket chains.”

The sustainability of its packaging is one of most studied areas in the Amandine Project, as all its formats are made using mono materials and that are 100% recyclable in the yellow bins. Currently, it has three formats: microwavable, 1.5 kg bag and another format of compostable cellulose. It has recently added the 6kg box of loose produce for cash and carry stores.

“Princesa Amandine” is the first potato to be awarded the “Flavour of the Year 2022” prize. “The brand’s value and good marketing are essential for the development of a product, but we must not forget that brand recognition brings about the moral obligation to offer a good product, and Princesa Amandine is not only well-known as a brand, but also as a high-quality potato.”

One of the marketing actions for this campaign consists of a competition to win a gift box for Michelin-starred restaurants.