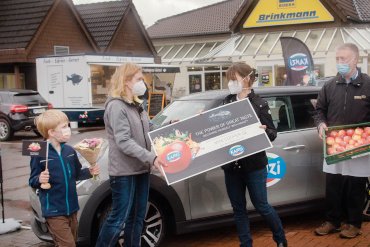 The European Kanzi apple season is almost over and the new supply from the Southern Hemisphere is starting. GKE, the European grower organisations and their members can look back with satisfaction on a successful season. Compared to last year, total sales in Europe increased with 14%. Especially the growth in Germany is remarkable. More than 25% more volume was sold in this important market. Demand for Kanzi is in the rise throughout Europe. ,,Kanzi’s refreshingly balanced sweet-tangy taste fits well with the taste preferences of modern European consumers. Supported by additional marketing efforts and raised brand awareness in all our key markets, Kanzi is increasingly ending up in the shopping basket”, says GKE CEO Dietmar Bahler.

In March and April, Kanzi organised a major competition for its consumers in four European countries. The grand prize was an all-electric Mini. The campaign message ‘Recharge with Kanzi’ reached millions of consumers, reminding them to recharge with Kanzi. On May 27th, the E-Mini was handed over to the lucky winner Sabrina in front of the EDEKA supermarket Brinkmann in Löhne, Germany. Sabrina bought the apples at this EDEKA store, making her the proud owner of the Kanzi E-Mini.

As part of the central brand message “The Power of Great Taste”, a new summer campaign will be launched during the Southern Hemisphere season, targeting both retail partners and end consumers. Under the sunny theme “Refresh yourself with Kanzi”, the refreshing energy of Kanzi apples will be highlighted this summer. Kanzi fans in the participating countries will have the chance to win a delicious beach chair by participating in an attractive online campaign. The summer activities will ensure good resale in Europe of the Kanzi overseas harvest and further boost brand awareness and preference”, concludes Dietmar Bahler.

The VOG Consortium diversifies its range with cherries

Nadorcott is safety, modernity and profitability