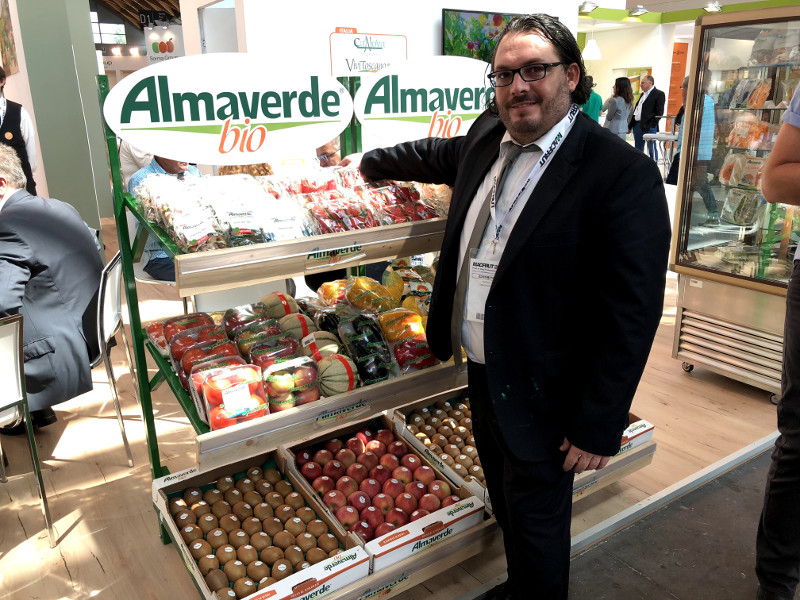 It is still in a trial phase, but according to the first results, everything is pointing towards the fact that the new project by the Almaverde Bio brand has a great future and is bound to renew the way in which ecological fruit and vegetables are sold in supermarkets. The idea involves Almaverde Bio Islands, a new concept that consists of introducing a differentiated space inside the supermarket to bring together the brand’s entire organic offer, both loose and packaged, and which also has specialised personnel to attend to the customers directly. Carlos Soto, manager of Ca’nova Spain, the commercial branch of the Italian parent company, explains that the first experiences that have been carried out in Italy have meant doubling the sales of their bio produce, mainly due to the loose purchase option and the wide range on offer brought together in a single space, although the self-service option is also offered.

At the moment, the first ‘Islands’ are already up and running in Italy, a market where ecological produce is a consumption reality, with 3,021 million euros in sales in 2016 (+15% compared to 2015), and 78% of families acquiring at least one bio product in 2017 (1 million more than in 2016). In addition, they are already studying the possibility of carrying out a trial in Spanish and Portuguese supermarket chains, with a view to exporting this sales method, which plans the renting of spaces inside supermarkets, or a percentage of the sales, depending on each case.

Advantages of the islands

Making the right choice when offering loose ecological fruit and vegetables brings important advantages: it allows a wider, more specialised range to be offered; it improves the quality/price relationship; and it involves an essential aspect for reaching consumers: the fact of paying a more economical shopping bill. The Almaverde Bio islands allow all of this through a specific, perfectly identifiable area, with personnel who weigh the produce and serve it in personalised bags and the guarantee of the bio certification on each of the pieces that are being marketed.

The first experiences have shown an immediate rise of at least double in bio sales, sources from Ca’nova guarantee. A figure that increases by another 10% after the start up of Loyalty actions such as promotions with gadgets, information about the produce, tastings, etc.

Ca’nova España was established to complete the bio fruit and vegetable range from its parent company, Apofruit, the most important top level cooperative in Italy, with 4,300 members. Its aim is no other than guaranteeing the supply to its customers 12 months of the year with the Almaverde Bio brand. The company, based in MercaMurcia, continues with the philosophy of excellence, committing itself to a demanding quality control. “Above everything else, we are technicians and our work consists of controlling the production of our associate farmers to ensure that all the produce that we market is completely safe and holds the maximum standards”. In 2017, the Spanish office invoiced 4.5 million euros amongst all its references and, as a whole, this year the network of Ca’nova companies in Italy, Spain and France have made a total of 90 million euros, growing by 20% compared to the previous year. They have also reached a total of 34,300 tonnes of fresh produce holding ecological certificates, amongst their over 40 references. Likewise, the export brand, ‘Almaverde Bio Ambiente’ brings together over 600 references amongst fresh produce, preserves, meat, fish, etc., forming an enormous range to serve the lovers of the healthiest food.