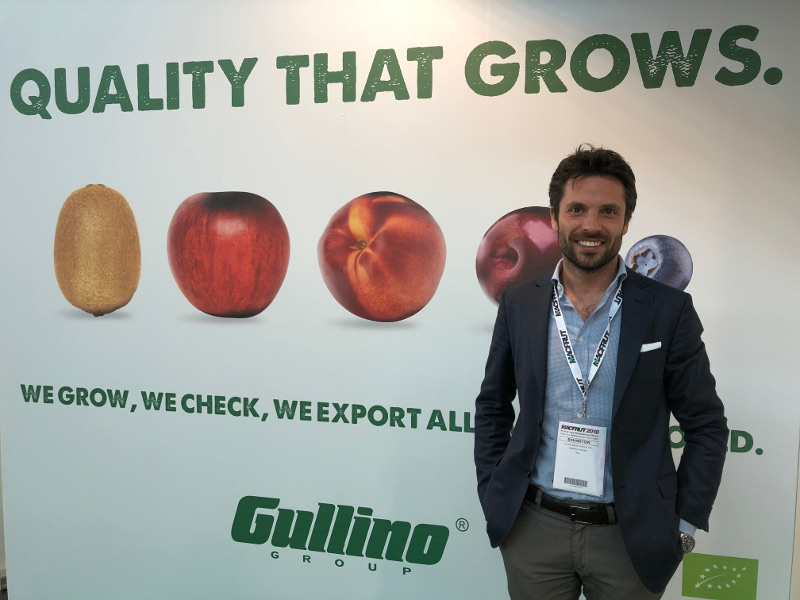 The Gullino Group started off as a family-run company, engaged in apple production. Subsequently, although it continued with this fruit, it changed over to specialise in kiwis and now it is going back to its roots, with a strategy that plans to balance out both fruits at 50% over the next few years. Last year, the group took the first step by starting to market apples, Armando Peirone, a salesman from the company, explains. The production of this pip fruit is completely located in Piamonte, at a height of between 400 and 600 metres, which gives its produce great quality and colour. In the short term, the production of bio apples will be added, as soon as the conversion period already started on several farms ends. “Currently, we already have ecological kiwis, and they amount to 35% of our total production”, Peirone states.

For 2018, they expect to reach 12,000 tonnes of apples on 120 hectares belonging to the group (19,000 tonnes and 350 hectares of their own land in the case of kiwis), and repeating or exceeding the invoicing obtained last year, 28 million euros.

The year has been complicated with regard to its star produce, the kiwi. “There has been little production, although the high prices have compensated somewhat.” The evolution of the sales has been slower than forecasted, they expected greater demand, but they have managed to supply all their customers. Looking to the next campaign they expect to “return to normality.” The harvest starts in September with the earliest green and yellow kiwi varieties and continues with Hayward from November until mid May.

Regarding stone fruit, they expect less volume than other years. “We start with peaches and nectarines on the 10th of July, when there are still areas producing large amounts.”