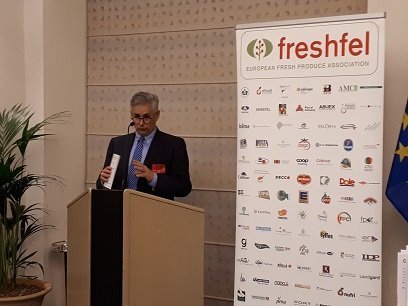 Freshfel Europe has published its first preliminary reaction to the European Commission’s recently released Farm to Fork Strategy as part of the European Green Deal.

Freshfel Europe welcomes the Farm to Fork Strategy, which will help facilitate the provision of nutritious, safe and affordable food to European citizens through measures in every step of the food supply chain from production to consumption. Nevertheless, Freshfel Europe remains wary of the viability of the high ambitions for the sector outlined in the Strategy that could inhibit its competitiveness.

Primarily the Farm to Fork Strategy presents an opportunity for the fresh fruit and vegetable sector to build on its existing work in increasing sustainability at all stages of the supply chain and in stimulating fresh fruit and vegetable consumption across the EU. However, the Farm to Fork Strategy is very direct in its ambitions for the agri-food sector, with specific targets for increasing organic farming and reductions in pesticide and fertilizer use. While Freshfel Europe supports the ambitious nature of the initiatives, Freshfel Europe holds reservations on the viability in practice of some of these measures over the long-term.

Commenting on the Strategy, Freshfel Europe General Delegate Philippe Binard stated, “The Farm To Fork Strategy must have a holistic view and take overall production environmental performance into account, which should not be disregarded in preference for organic. Measures such as Integrated Pest Management often have greater environmental benefits.”

Mr. Binard also explained that, “The fresh fruit and vegetable sector’s ability to provide high quality, safe, nutritious and affordable food to consumers and adequate return for growers should not be compromised. Effective alternative tools must be provided for growers to cope with invasive species and plant diseases if plant protection product use is to be reduced”. In its position paper, Freshfel Europe outlines that maintaining the competitiveness of the fresh fruit and vegetable sector is key. To avoid market distortion and unfair competition production standards and rules must be taken into account in any proposals.

Furthermore, Freshfel Europe was disappointed to note that no concrete initiatives are included in the Strategy to directly support the EU fresh fruit and vegetable sector.

This is despite the Strategy reference to current insufficient consumption of fruit and vegetables in the EU and that a diet with more fruits and vegetables will lead to improved health and will have a beneficial environmental impact.

Freshfel Europe’s preliminary reaction to the Farm to Fork Strategy is available to here.

ASIA FRUIT LOGISTICA 2021: the place to meet in person is Hong Kong

From creative communication to a harvest forecast via app: this was Interpoma Connects 2020