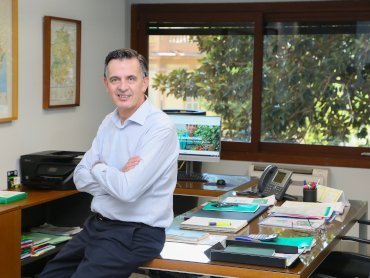 We went over many of the current subjects with Miguel Abril, sales manager from Anecoop: productions, campaign, sustainability, representative organisms and other hot topics, such as the WCO.

Do you think that for things to turn out reasonably well, we are going to need a lower offer for both persimmons and citrus fruit? I am asking this question because of what happened in the last campaign with citrus fruit and in this campaign with persimmons. Or are the two situations different?

The ideal situation is a balance between offer and demand, but the basic principle lies in not reducing the offer but, rather, in a completely different idea: the demand must be increased.

And to this effect, the sector is in a privileged position because the world population continues to increase and there is a favourable trend towards fruit and vegetable consumption. In spite of this, the quality has to be improved, along with planning the calendars, converting the varieties and promoting the produce.

And on a sector level, we need to open up new markets and demand fewer protocols or, at least, ones that are not as strict.

This is clear for both categories, but much more so for persimmons, which are still a long way from reaching their consumption ceiling.

All of this does not mean that at times offer regulation steps should be agreed on, as happens at times (as in the case of stone fruit.)

How is the second part of the campaign looking for Anecoop’s cooperatives?

Sales are fluid and prices appreciably better than last year, particularly in mandarins which, besides, have no quality problems.

At this part of the campaign we will have less offer than last year in some varieties. This is due to two reasons: the bad weather conditions before Christmas and the speed of the campaign, which has brought several varieties forward on the market. The speed of the first part of the campaign will become highlighted in the second part, when there will be a shortage of Lane lates and other late varieties. All of this in a context where a 10% drop in produce was already expected. This limited offer will allow for better prices.

Amounts of the ‘new’ mandarins such as Nadorcott and Tango are on the rise because more plantations are coming into production.

What is your evaluation at virtually the end of the persimmon season?

It has been the first campaign in which we have had full production. From the very beginning it was complicated and with a quite chaotic offer, although this became more regulated in December and January. However, this gradual improvement in prices has not been enough to compensate the situation in general. The results will not be good, particularly for those who have fruit still in the fields, which is not the case of Anecoop’s producers.

What are your impressions regarding the powerful marketing and advertising campaign carried out with Persimon?

We are very proud of it. For a long time we have made important investments in Germany, France, the United Kingdom and Canada, and this year we have extended it to Saudi Arabia and the United Emirates; the most significant point is the noise we made on the Spanish market, where there are still many people who know nothing about the fruit, therefore, I am sure that the campaign’s results will be seen much more over the next few years.

What is your opinion regarding the voices that are increasingly raised in favour of local produce consumption? We are eminently an export country…

Preference for local produce is nothing new, although it is true that there is a growing number of consumers following this trend which, furthermore, makes perfect sense.

I think it is unstoppable, but perfectly legitimate. We must learn to live with this trend and this means being able to adapt our production, calendar etc., because there are times when Spanish production continues to be essential. We will possibly have to change some things, but we must learn to live together.

And here in our own home country, we must vindicate our own produce, just as the French or Italians do.

Anecoop is one of the main keystones of the sector and its position is always important on topics that affect it as a whole. Do you think that the citrus fruit sector has done its homework to ensure it doesn’t suffer again like it did last year? In view of this campaign’s bonanza, it seems that nothing, or very little is moving.

With regard to the sector as a whole, I would categorically say no. And it is a shame because this sector really needs a strong organisation to represent it and that can go to Brussels on its behalf. Additionally, we need actions that put value on the produce. Intercitrus has to get down to work and, to do this, it must make all the changes that are necessary.

South African exporters assert that they want to see Valencian companies within the main worldwide organisation, WCO, which seven new countries have just joined. Does it seem logical to you that we are not represented in spite of the problems caused by South Africa?

We are represented through Ailimpo, but personally I would say that if we have been invited, we must go and be in all the places where decisions concerning us are being made. If the WCO is going to work on the global defence of citrus fruit and try to increase consumption for the category, I think that we should be present. Having said that, we are a company that defends the rights of Spanish producers above everything else. This means that the WCO’s activities must be developed using a level playing field for all countries.

In short, we should not stay out of the WCO, but we must be vigilant to ensure that it meets its targets and it is not used as a backdoor for productions from other sources to enter.

Anecoop’s social mass is made up of farmers who are becoming increasingly defenceless because they lack the tools to face up to pests, including foreign ones. (Brussels has just banned clopyriphos and metilclopyriphos). What can be done?

We are not against a reduction in the use of pesticides; Anecoop is concerned about environmental sustainability, but there are also other sustainabilities such as the farmers’ economic situation. Whatever is done must be done for everyone. If a product is banned in Valencia, it must also be banned in Cape Town.