José Gandía, the magnetism of age 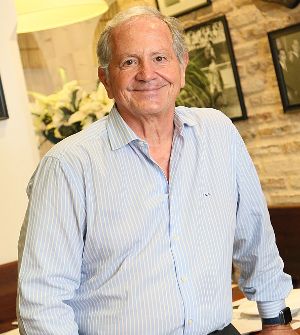 José Gandía was born in Tavernes de Valldigna, Valencia, in 1945. He is an unusual Valencian because, due to the political circumstances, he has never lived in his homeland. His childhood is linked to memories in the French Protectorate of Morocco and Marseilles, places where his family lived. He spent his teenage years studying in Freiburg (Switzerland), in the boarding school where in previous years, King Juan Carlos had studied.

He is a health fanatic, who exercises for an hour with his personal trainer at home every day. He has worn gadgets indicating his blood pressure, heart rate, hours of sleep etc. on his wrist for many years. And he has travelled the ‘Camino de Santiago’ pilgrim route from Roncesvalles to the Apostle’s tomb three times.

He is very happy in his third and longest marriage: over 20 years with Macarena, with whom he has two children, a fourteen year old boy and a nine year old girl.

He received us on his estate, La Jarilla, where we had, what else!, some green tea. From there, we travelled to the monumental city of Seville, to his house, a 16th century mansion that formed part of the “Casa de la Moneda” (the Mint). We then strolled through the streets and lunched in this marvellous city.

Close up, you see a brilliant, intelligent man, who, above all, keeps himself abreast of everything. A surprising person who gives deep thought to the questions covered. The truth is that he exudes a kind of magnetism, which he calls “the perspective of life that age gives you.”

Could you tell us a little about your family’s history?

My mother belonged to the Valencian gentry and my father was a well-off citrus fruit farmer, who along with another family from Sóller, had set up in Marseilles to sell their productions. All of this happened before the Civil War. In those years the anarchist risings were starting and my family decided to leave the country altogether. My father was an excellent salesman and due to the relations existing between Morocco and Marseilles, he established a company in Morocco which was quick to prosper. My mother returned to Valencia to give birth, but we never lived there.

Do you dream in French or in Spanish? Because they say that your true language is revealed in your dreams. I have heard you talking in French in the corridors of La Jarilla.

I was educated in French and I studied Economics in the same language. I have always thought that I read better in French than in Spanish, but by now I have spent many years in Spain. I think I can dream in both languages.

For many years you were a Moroccan resident, but if I am not mistaken, you were forbidden to enter the country for almost two decades.

Yes, that is true. When I wound up the family businesses in the country, King Hassan II made it obligatory to invest in treasury bonds with an extremely low interest rate and I did not do so. I took the money out correctly, but I disobeyed and one of the reprisals included being placed on the government’s black list. One day, one of the King’s French advisors came to Spain and discovered the work we were doing. When he returned to his country he explained the work, stating that I was the son of one of the country’s first colonists and that I had lived there. So they allowed me to return. Now, as well as the business, we also carry out important philanthropic work, particularly with women and children, teaching them to read and write.

Tell me about the happiest and the saddest moments of your life?

Although I wasn’t aware of it, the happiest moment of my life was the day I met Macarena, my wife. And sad moments, unfortunately, I have had a few: the day my sister, to whom I was very close, died in an accident in the car that my father had given her for her good school marks. And the day my son, many years later, suffered another car accident and was left in a wheel chair.

Let’s change the subject. You did not study to work in this sector, but for the world of finance and business, and, on the other hand, you have made some of the most daring decisions in this agricultural world and have made it evolve and taken it to the forefront.

Yes it is true, I was not educated for this, but family circumstances led me to this business. Suddenly I found myself alone, without my parents or my siblings and an agricultural legacy to manage. It was a question of looking to the future and above all, of investing in research by the most advanced universities, the American ones.

I believe that you personally know the guru of nutrition and longevity, the chairman of Dole. Are cranberries responsible for your fantastic mental and physical health?

We were guests in his house. He is 93 years old now and it is incredible what he is doing to ensure that health and longevity go hand in hand. He is a philanthropist who has invested millions of dollars in research.

As for me, obviously I look after myself, I eat frugally, I exercise and I read, I read a great deal. It is all a question of willpower. I always keep myself active.

Keep yourself active! When I contacted you, you were either in Hong Kong, in Sydney, in California or at the University of Florida.

Yes, over the period of a fortnight I was in quite a few countries for business. I also visit the universities that work with us every year.

We walked through the streets of Seville, under the overwhelming midday heat of September, because Pepe is proud of its historical centre, its cathedral, the building that was its synagogue, its Archive of the Indies and all of the city’s magical architecture. The heat made us take a break and we entered one of its typical restaurants, where bullfighting elements covered the walls.

I have no alternative than to ask you if you are a bullfighting fan because I do not like the decorations and if it were not for the coolness of the bar and the beer….

Yes, I am a bullfighting fan. I went with my father to bullfights in France, in Spain and I continue to go. You have to understand bullfighting: it is a road that leads you to death and in one way or another, a parallelism can be made with our lives, since the dimension of the challenge of death gives you the dimension of life. The art of bullfighting arises with the danger of the death of the bullfighter and of the bull. I have just read Isabel Allende’s latest book, ‘The Japanese Lover’ and, relatively speaking, it talks about the same subject.

Who are your idols?

I like classic bullfighting and I think that the best representative is Morante de la Puebla. When he kills well, it is spectacular. I also like José María Manzanares.

PrevMe Fresh Market, a new supermarket style
Enrique Guío: hitting the bull’s eyeNext
YOU COULD ALSO BE INTERESTED IN