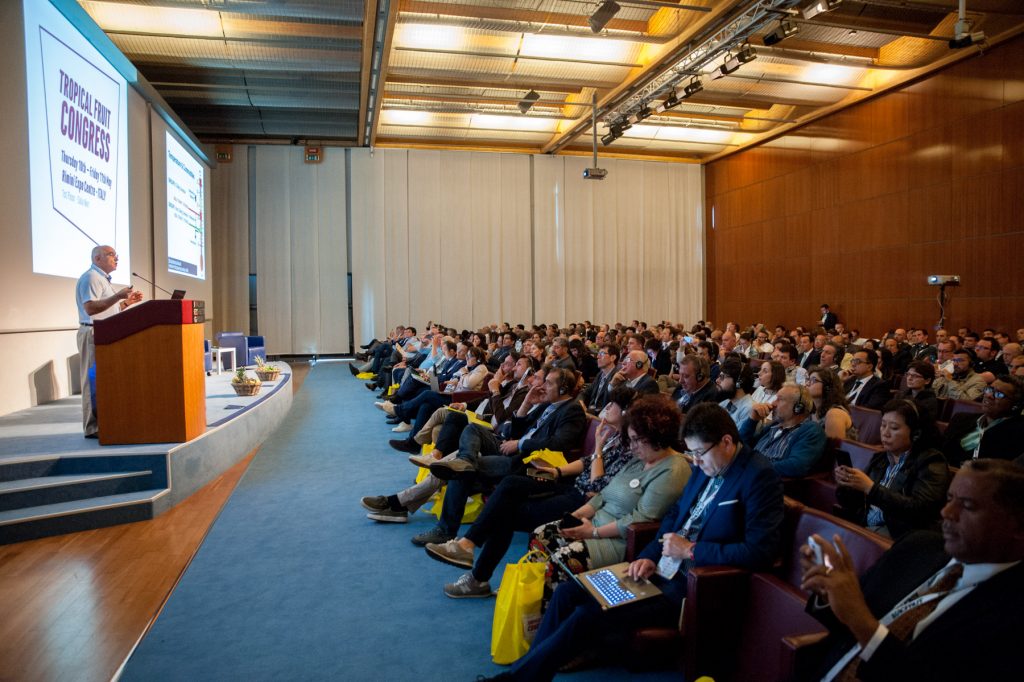 First day at Macfrut of the Tropical Fruit Congress, the first European Summit on tropical fruits

The Tropical Fruit Congress, the first European Summit on Avocados and Mangoes, is fully booked. Hosted at Macfrut, the international trade fair for the fruit and vegetable sector, the Congress gathered more than 300 producers, exporters and the world’s leading experts on tropical fruits. Yesterday’s first session, coordinated by Roberto Della Casa (Agroter, University of Bologna), focused on marketing and quality.

‘The tropical fruit sector is growing strongly in Europe. In fact, in recent years, avocados and mangoes have experienced a real boom and are now eaten daily by consumers,’ President of Macfrut Renzo Piraccini said at the opening of the Summit. ‘The success of these fruits in countries such as France, Germany and the Netherlands, but also in Italy, has been facilitated by recent health trends and greater interest in trying exotic recipes and ingredients, both at home and in restaurants.’

Elisa Macchi, director of the CSO (Centro Servizi Ortofrutticoli), provided an overview of European markets, in particular the Italian, French and German markets. Out of these three countries, France consumes more avocados with 114,000 tonnes consumed in 2016, showing an almost constant growth trend over the last 10 years (+42% from 2007 to 2016). Mango consumption, instead, stands at 40,000 tonnes, with a 76% increase in the last 10 years. Mangoes are more popular in Germany: almost 65,000 tonnes of this fruit were consumed in 2016, a 56% increase compared to 2007. Avocados, however, are gaining ground among the German population: in the last 10 years, avocado volumes have almost tripled and amounted to 47,000 tonnes in 2016 (+24% on the previous year).

Carlos Crisosto (researcher at UC Davis, California) spoke about the proper handling of mangoes and avocados throughout the supply chain. Xavier Equihua, CEO of the WAO – World Avocado Organisation and Leonardo Ortega, Director of Research at the National Mango Board, talked about marketing, respectively of avocados in Europe and of mangoes in the USA.

The first day of the congress ended with the workshop “How to sell Mangoes and Avocados” with the participation of Raffaele Spreafico, Managing Director of Spreafico, Luca Garletti, CEO of McGarlet, Ulrich Spieckermann, CEO of Eurogroup and Adrielle Dankier, Commercial Director at Nature’s Pride.

Wholesale entrepreneurs are preparing to face new challenges by establishing common goals and strengthening teamwork at European level. At Macfrut, a first step was made in this direction, when Fedagromercati (National Federation of Fruit and Vegetable Wholesalers), COEMFE (confederation of Spanish wholesalers) and UNCGFL (union of French wholesalers) signed the European Wholesalers Manifesto during the conference “The challenge of Wholesale Markets in the new European distribution scenario: a debate about models”.

Several key topics, the ones contained in the Manifesto, were addressed by Valentino Di Pisa, president of Fedagromercati Nazionale: ‘Market renewal, new working hours switching from night shifts to day shifts, development of urban logistics, internationalisation, development of a quality brand at European level, new relationships with other players in the supply chain, and partnerships in the sector for presenting European projects. We will bring these matters to the attention of national and European institutions.’ Claudio Scalise (SG Marketing) explained that dynamics have changed in the last few years, and that wholesalers will have to adapt their services and logistics to be able to compete with large-scale retailers and exploit the opportunities offered by e-commerce and smaller retailers. A round table discussion was then held between Yves Mustel, Managing Director of UNCGFL, Andrés Suárez, president of COEMFE, and Fabio Pallottini, president of Italmercati.