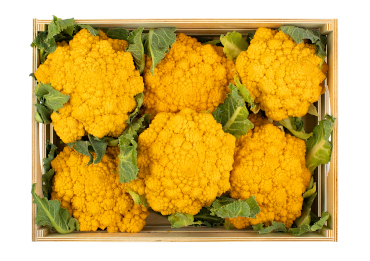 HM.CLAUSE is reaffirming its commitment to innovation with a variety of orange romanesco cabbage that has outstanding organoleptic qualities

The seed company has proposed continuing along the path of innovation and differentiation on the markets that it started with products such as the Adora tomato, and this year it is launching a brand aimed at consumers with which it intends to revolutionise the Romanesque market: Amoresco.

Two attractive, orange-coloured varieties are marketed under this name, which stand out due to their high level of carotenoids and a greater antioxidant capacity compared to other materials on the market, Manuel Ferrer, the Food Chain Manager for EMEA, explains.

“It is a product that is clearly focused on the chain, bringing added value to stimulate consumption of this brassica in Europe. Amoresco does not stand out just for its highly attractive colour, maintaining this bright colour even after cooking, but also due to its sweet flavour, which is better than that of traditional varieties.”

This commercial launch has been reached after several years of development and it is being led by the Italian market, the main production area for romanesco cabbages, although Amoresco is also being cultivated in the United Kingdom, along with cultivation in Spain and France. “In Italy and France, mainly heads of calibres 6 and 8 can be found, and also florets for twin packs in coloured containers along with conventional romanesco cabbage.”

There is a range of varieties under the same brand that they intend to use to extend the supply of romanesco over this year. In southern Europe, the production will mainly be developed from November to May with two varieties, AMO125 and AMO145.

HM.CLAUSE continues developing new concepts in brassicas. And the fact is that, although consumers are usually more conservative in times of crisis such as the present one, the healthy eating trend could encourage this type of innovation, according to Manuel Ferrer.

This year, Amoresco has been nominated for the Fruit Logistica Innovation Award 2022 (FLIA), a recognition that confirms that the seed company is doing its work correctly. “Being nominated allows us to be present on a scenario that gives great visibility to innovations. It is a very objective and honest award, because it is granted by professionals from the sector itself and it allows the product to be revealed to the public. We have already lived through this experience with Adora and we are very proud to receive this new nomination.”

PrevAmela®: the essence of La Palma
Nominated for the 2022 FLIA AwardsNext
YOU COULD ALSO BE INTERESTED IN

The CAAE will certify exports to the United Kingdom