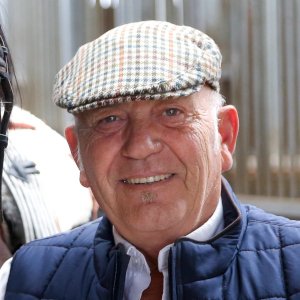 Few people know about rural Madrid. To the south east of the province, the town of Villaconejos could be its centre. Here, in summertime the land is cracked by the sun, and the cold winters bite deeply. Melons are the king of Antonio Agudo Contreras’ economy and he has devoted his entire life to them.

At the age of 60, he has spent half of his life as a melon wanderer. His parents and 700 of the 1,000 families who lived in the town, used to migrate for 6 months of the year to other areas where they sowed and harvested melons.

As a child he took his naps amongst mountains of melons and he was a teenager with a Puig moped, cigarette in hand. Today, inspite of his daughter’s reprimands, he is still a 20-a-day smoker.

We visited his town; we ate in the famous main square of Chinchon and we went out to the fields to see fighting bulls and to go horse riding, as tradition demands in a region where bullfighting has many fans.

It seems slightly strange to me to be so closeto Madrid and at the same time to be in the middle of the countryside, on this bull and horse ranch.

Yes, we are just over half an hour from Madrid by car (if youdon’t get caught up in traffic), but this is the countryside. In Villaconejos there is nothing, except for 5 melon companies.

In your profile photo you are on horseback.

Yes, but not on this horse. I no longer have that horse. I don’t ride as much as I used to, but if I get the itch, I come out to El Chaparralto enjoy myself for a while.

Tell me about having to leave Villaconejos for six months a year.

It was a deep-rooted custom in the town, which my grandparents followed. We would leave on the 20th of March and we would return on the 12th of October to sow and harvest melons on the rented farms anywhere in Castilla La Mancha, Extremadura and even Andalusia.

I imagine it as a wagon trail of families travelling to the American west.

It was very similar, as whole families set out along dirt or tarmac roads in lorries, full to bursting with furniture and belongings to spend half a year away from home. Some people even took their animals.

So Villaconejos would become a ghost town?

Yes, it was during these months. The houses were locked up tight until October. In Villaconejos, families had two sets of furniture, the ones they kept here and the ones that we took in the lorry when “we went to the melons”.

Where were you born?

The women who gave birth between March and October had their children outside the town because the whole family had left. I was born in Mocejón(Toledo), but I could have been born in Ciudad Real, Badajoz or Córdoba.

What do you remember of these moves?

The journeys could be long, but as we were four brothers, travelling in the back of a lorry was an adventure, full of games and teenage pranks.

We were lucky that my father worked the fieldsbelonging to a Marquis of Toledo for many years and this gentleman took great care of all the children on his land. In the mornings, a taxi collected us and took us to the village school. We had lunch there, and in the afternoon we returned to the farm.

Years later, in the years of democracy, in order to resolve this problem, the Ministry of Education established “the melon-growers’ course”, a school year which, exceptionally, was more compressed and accelerated and that ended in March.

What did you do in the winter?

Basically nothing. If everything had gone well, we had money and the only concern was to look for new land for the next harvest.

As lads, we used to come to Chinchonto see the over 300 women who worked in the textile factory. We would be waiting for them on our mopeds at the end of the working day.

Is this how you met your wife?

I spent many days outside the factory, but I met my wife at a party in my town, although she is from Chinchon and was born in one of the houses looking out over the main square.

You must have seen many bullfights in this historical bullring?

Bullfighting and bull running are very traditional in the region, but if I am perfectly honest, I am not a great bullfighting fan. I like the horses, but I don’t identify with the art of bullfighting. And that is the case even though there is not one village around here that does not have its own bullfight, although the most spectacular is the one in Chinchon. In Villaconejos, bull running was banned years ago, but they have brought it back again now.

But I am sure you have a favourite bullfighter, don’t you?

Yes, I do. I like José Tomás, but not only for his bullfighting, but rather because he is a fan of Atlético de Madrid football club, as are all my family. My children have had season tickets virtually since they were born and my nephews, who are professional First Division football players, started playing in this team.

Is a good melon recognizer born or does he learn the trade?

They learn the trade when they are born because melons have been in our lives since we were little kids. Everything revolved around them.

Do you go to Madrid at the weekends?

My wife and I used to go regularly – shopping, strolling along the Gran Vía, but now that I can go more, I go less and particularly if I have to go to a shopping centre. I can’t stand them.

I go to my country house to look after my lovebirds. I bought three pairs and now I have over 60 birds. I also have two dogs, two tortoises and fish there. I like to invite my friends over and cook a good roast in a wood-burning oven or a good stew in a clay oven.