Biogas: the most unknown renewable energy 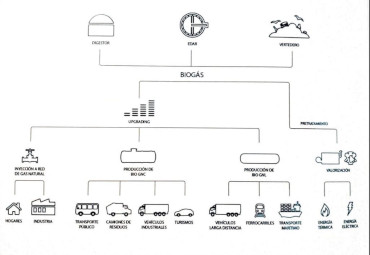 Price volatility of resources such as gas and oil, which are currently a hot topic due to the invasion of Ukraine, shows that dependence on external markets is a hindrance for Europe’s economic development.

60% of the gas consumed by Germany comes from Russia, and in the case of Latvia this dependence rises to 100%. In Spain, this subordination to foreign gas has become a real challenge since November 2021, when the Maghreb-Europe gas pipeline, which supplied us through Morocco was closed; all of this as a result of the breakdown in relations between Spain and Algeria. In spite of everything, Algeria continues to supply around 45% of the gas consumed by Spain through the Mezgaz pipeline.

Spain also depends on the United States and Russia, but on a much smaller scale. For this reason, now more than ever, we must find alternatives in order to reach energy self-suffiency.

For many years now, there has been a sustainable alternative for producing energy, which has been growing slowly, alongside solar panels and wind farms, although not in the same conditions: we are talking about bioenergy, specifically, from biogas.

“It is essential especially for energy self-sufficiency. Biogas would contribute to the country’s energy safety and sovereignty, and it would be essential for self-sufficiency,” Paz Gómez, a researcher from AINIA indicates.

Bernat Chulià, Director of Global Studies and Analysis at Genia Global Energy, Valencian company benchmark in renewable energies, explains on this point that “with biomethane we could reach between 15 and 20% of the current natural gas consumption, both in household use and industrially, and this would allow a certain improvement in the trade balance.”

It might seem surreal that energy can be made from the beet pulp or from tomato skins. It can even seem curious that not only meat can be used from pigs, but also their slurry. Likewise, it might sound strange that the straw from cereals is reused to solve environmental problems. But it is not strange at all; our European counterparts are already doing it.

Simply put, biogas is an energy that is obtained from organic waste. Rubbish is turned into raw material for a renewable energy source.

Biogas is produced from a biomass (made up of this organic waste) using a biological process called anaerobic digestion, which consists of the decomposition or breaking down of organic matter in the absence of oxygen, and it generates different gases, amongst which are carbon dioxide and methane. In order to be able to take advantage of these gases, and turn them into energy, a specific biogas plant is needed, which stores the waste in a ‘biodigester’, and in which the material is changed from a solid state to a gas.

Although it might seem that any organic waste could be suitable for producing biogas, the truth from a technical and economic point of view is that not all rubbish is ‘just as good.’ Bernat Chulià, a chemical engineer and Director of Studies and Analysis at Genia Global Energy, a Valencian company that is a benchmark in renewable energies, explains that given the properties of each type of waste, there are two parameters when determining the value: the organic matter content and the speed at which it decomposes.

‘Ranking of waste for biogas’

There is a ‘ranking’ of the waste that is most useful for biogas production, although it is often mixed up together in a process called co-digestion.

On the podium may be found the agrifood industry’s substrates, that is to say, perishable products that generate waste or that do not reach the demanded standards.

The company Genia Global Energy has an agreement with the Spanish Persimmon Association to manage the 18,000 tonnes of discards of this fruit generated each campaign, which are used to produce biogas in a new plant in the Ribera region. “As these materials are fresh, their percentage of organic matter is very high, meaning they are interesting for producing biogas,” Chulià affirms.

The studies indicate that with 500 tonnes of potato skins a biogas plant can produce up to 372 MW of electricity.

In second place are the substrates obtained from livestock, specifically manure and slurry from poultry, rabbits, pigs and cows, etc. These are interesting due to their high organic matter content and “as they have already been decomposed by the animals’ digestive tracts, the material allows more biogas to be produced in less time.”

The bronze medal would be for agricultural waste, that is to say, “what is produced in the fields: waste from the harvests, straw, cereal husks that are removed from the grain, a tomato plant, silo dust… They are more complex materials, and the decomposition time is longer.”

In fourth place, there is a single group bringing together the substrates extracted from different industries, such as beer, cider or wine (from which the grape skins are extracted.) The waste produced by the oil industry or even the glycerine industry that is produced in the manufacturing of biodiesel also enter this group, which “cannot be reassessed in other things and it is a bomb when producing biogas,” according to the engineer from Genia Global Energy.

What is biogas used for?

Biogas, unlike other renewable energies, is the only one that can be used in electrical or thermal energy or as fuel. Therefore, it may be used in boilers to produce heat, in engines and turbines to generate electricity or as fuel for vehicles in heavy maritime, land, aerial and even space transport, replacing fossil fuels.

Likewise, biogas may be injected directly into the conventional natural gas network, although for this, a refining process would be necessary, eliminating the CO2 and therefore, obtaining a greater concentration of methane. Here we are talking about biomethane or biogas upgrading.

But, beyond obtaining energy, from the biogas plant’s waste a secondary product may be extracted: the so-called ‘digestate’. Inside the digester not all the waste is fermented; a type of mash or slurry is left behind after the microbiological anaerobic digestion process that can be transformed into organic fertiliser. Therefore, this bio fertiliser can be used to reduce the use of synthetic fertilisers.

Paz Gómez, a Researcher and Project Manager at the technological centre, AINIS, affirms that “there is a great deal of research in the management of these affluents at present.” However, there is no specific regulation in Spain that regulates the application of the digestates; therefore, the project development has a “slight curb”: “you almost have to work more with what is done afterwards with the digested product than on the actual biogas production process.” Bernat Chulià states.

But if there is one point on which all the experts coincide it is the lack of flexibility in the formalities. Óscar Bartomeu assures that each region works differently and that “the legislation has not been designed or adapted.”

Likewise, Bernat Chulià explains that dealing with a project in the Public Administration is a very long process. He recounts that they have been three years with the formalities for a biogas plant in Picassent, a time in which the entrepreneur, who originally decided to invest 16 million euros, could have got cold feet, “in addition to the fact that during this time there are 120,000 tonnes of waste that are being managed in different ways, if they are being managed at all.”

The incoherency lies in the fact that, in spite of these difficulties, the current economic and climate context needs a push for this type of renewable energy more than ever.

Chulià explains that “we are moving towards a system in which de-carbonisation and self-sufficiency using renewable energies is going to be necessary,” and he affirms that for this reason, “biogas is one of the technologies that is definitely going to be implanted, because there are countries such as France which in three years have gone from having 40 biogas plants to having 400. It can’t be stopped.”

Biogas does not only reduce the emission of greenhouse effect gases which would continue being emitted directly to the atmosphere in an uncontrolled way if the organic waste, such as manure or rice straw, are not managed. For this same reason, this renewable energy also offers innovative and effective solutions for recycling of manure and organic waste in a cheap, safe way for the environment.

But there is a more important reason for promoting biogas according to the experts.

Currently there are 146 biogas installations in Spain. According to data from the IDEA (Institute for Energy Diversification and Saving), “compared to the rest of Europe, where there are around 19,000 installations, biogas has only undergone a modest development in Spain.”

According to Óscar Bartomeu, in Europe biogas is seeing a “true revolution”: “this year for example, 25% of the gas in Denmark was renewable, they manufacture it themselves. In Spain, this figure is 0.1%… there is virtually no renewable gas.”

Spain has a potential that other countries do not have: it is the largest fruit and vegetable producer in Europe, the first pork producer, the fifth meat exporter in the world. “This means that we have a great availability of resources for producing biomethane,” Chulià affirms, “but at the same time we run the risk that we are not capable of discovering that it is an opportunity for the Spanish industrial sectors when increasing competitiveness against other industries from other countries such as a de-carbonised industry that looks after the environment.

The greatest problem comes when the biogas produced in Spain is sold, mainly, abroad, to Denmark, Switzerland, Holland or the United Kingdom. These countries have realised this potential and are taking advantage of it, unlike Spain, which by the time it finally decides to decarbonise its industry, it could be too late, and it won’t have access to its own gas, having to look for it abroad again.

In spite of everything, it seems that in recent years biogas has undergone a mini-revolution and is starting to find its place. “We have never been this good, at least in intentions,” Bernat concludes.

We still have a long way to go, but many people are beginning to think we could soon start to see the light at the end of the tunnel.