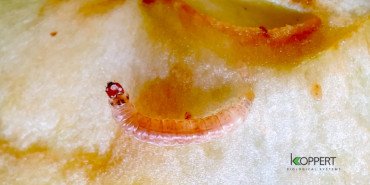 Currently, the over 100,000 hectares devoted to pear, apple and peach production in Spain have a serious common problem caused by damage to fruit mainly by lepidoptera such as Codling Moths (Cydia pomonella) and Oriental Fruit Moths (Cydia molesta). Spanish fruit producers, concentrated in Catalonia, Aragon and Murcia are finding it very difficult to control these pests with the tools available to them. The normal control methods are insufficient to keep the increasing populations at bay. Additionally, the forecast is for the pest levels to grow each year, therefore the current treatments will become increasingly less effective.

Koppert Biological Systems has developed a biological insecticide that is particularly indicated to control lepidoptera in fruit trees. This insecticide, Capirel®, bases its efficiency on the power of the beneficial nematodes, Steinernemafeltiae. They are microscopic worms that are introduced into the hibernating lepidotera larvae to reproduce quickly inside and feed on them until killing them. Steinernemafeltiae is adapted to the cold; therefore it is very suitable for application to orchards in autumn.

The user protocol developed by Koppert is based on the application of CAPIREL® from October until the beginning of December. During this interval, the action of the nematodes manages to reduce both the hibernating larvae population and the damage to the fruit in the next campaign by up to 80%. This reduction of the pest level is essential in order for the means of control that are usually used from April to September to be really effective. CAPIREL® is a biological insecticide, therefore, it is authorised for use in ecological farming.

Koppert has also confirmed the high efficiency of CAPIREL® for biological control of other pests emerging on fruit trees, such as Summer Fruit Tortrix (Adoxophyesorana) and Red-belted Clearwing (Synanthedonmyopaeformis). The excellent results obtained with CAPIREL® have managed to make it generally used in France, one of the main European stone fruit producers.