Continuing to reinvent itself after 40 years 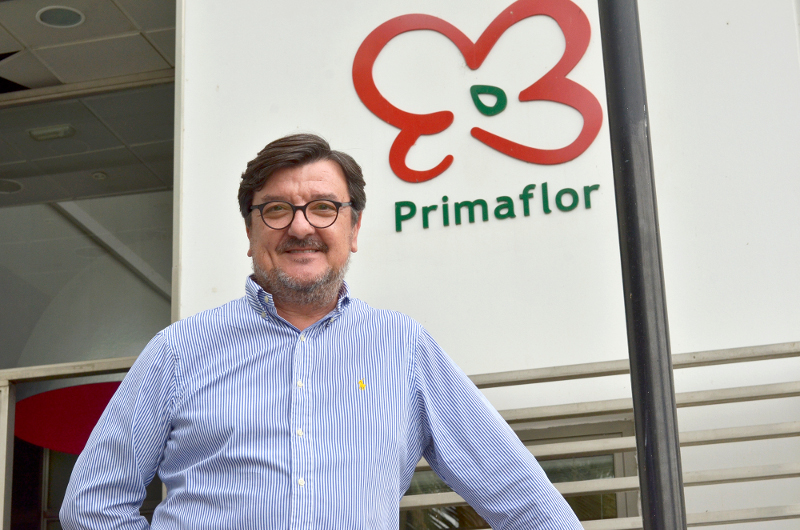 Celebrating nothing less than 40 years surrounded by 2,400 people and with the two founding members (Cecilio Peregrín and Lorenzo Belmonte) was a complete “milestone” for Primaflor. And without any doubt it will be an incentive to continue doing what they do best: producing the best salads and leaf produce, looking for this point of innovation that allows them to maintain their quality standards and continuously improving.

We interviewed Cecilio Peregrín, corporate manager of the Primaflor Group, on such an important date and at the start of the 2017/18 campaign. He talked to us about the topic that concerns the sector most: water, but also about exciting projects with a collaborator who has become their best travelling companion, the chef Rodrigo de la Calle. “He gives us many ideas for developing new produce and mixtures.” Therefore, this project that started with an expiry date is on the way to being repeated thanks to the synergies that are being generated by both sides. “Rodrigo has two restaurants in China and he is presenting us with very interesting options for new oriental products. We have tried and tested them, but at the moment they are medium-long term projects, we cannot go any further with them now.” Every year the company carries out trials with over 350 varieties from countries as distant as Burma, Malaysia, China… it drinks from all the sources possible, ranging from collaborations such as the one already mentioned with the ‘green’ chef, to suggestions by employees who discover new products on their holidays outside Spain, the search for world trends by the Marketing and Development department and continuous contact with the seed companies, the pilot plants of which are visited periodically in the USA to find out about the new developments. Parallel to this, they are not putting their main strategy to one side: improving their current range (they have over a hundred references, 8 of them oriental, amongst Nuestros Frescos, Bowls-Extras, Vida Moderna…) and diversifying it, placing special emphasis on new mixed leaf ranges. “We want eating lettuce to be attractive and fun, as well as being healthy. And we like to think like consumers: what does the produce look like; how am I going to eat it; is it good… And obviously, the packaging should draw attention.”

In order to carry out all of this, they invest large sums in R&D+i. The latest amount rises to 1.5 million euros, at least initially, since as needs are detected the expenditure increases for new requirements regarding machinery, packaging… In fact, over the next two years the company plans to pay out 33 million for the mechanisation of the production processes, developing new products and R&D, amongst others.

In three years the company from Almeria, which closed the past 2016/17 year with 168 million euros in invoicing, plans to break through the 200 million euro barrier. An important figure, but one which depends on the evolution of a problem that is on the way to becoming endemic in the sector: the drought. Primaflor’s technical department is endeavouring to implement cultivation techniques that make the most of “every drop of water”. And the fact is that water management has become a matter of absolute priority. “We take this factor into account both when selecting the produce, the cultivation areas and the customers with whom we work,” Peregrín affirms. We have to do more with less. A challenge that is added to the many others that have been overcome over the past four decades.