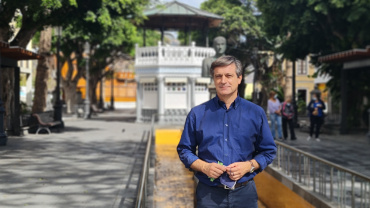 Fruit Today talked to Domingo Martín, Manager of Cupalma, one of the Organisations of Producers on the ‘Isla Bonita’ (the ‘Beautiful Island’, as La Palma is traditionally known is Spain) with the longest historical background.

What is Cupalma’s differentiating characteristic?

Today’s Cupalma is the result of the merger of several cooperatives from the same island. We have over 2,000 smallholders, whose production often comes from half a hectare of land. This situation gives these farms a peculiarity: they have very direct, on site monitoring.

Another of our distinctions is that we have productions in the most secluded areas of the island; an island that has very steep terrain and a high altitude. The most distant of our producers are located on the Fajana de Garafía (and ‘fajana’ is understood here not as the Media now uses it, but as a terrain on an eroded platform, with soil on top of it.)

You have always championed a concentration model based on a complete merger and not a half-hearted model as some other unions do.

Yes, of course. Cupalma is all over the island and for over thirty years we have been carrying out concentration work using a total merger. Three cooperative merger operations have been carried out, in a setting where the mentality is not in favour of this idea. From my point of view, if a real merger occurs in order to gain efficiency and market share, it must be carried out 100%; that is to say companies that are involved in the merger disappear and a new organisation is created.

I think that in today’s world it is the only feasible way forward. We must promote the merger of cooperatives, but it is a vocation that is seeing a great deal of resistance. The Minister of Agriculture himself has suggested it to us at our meetings.

Do you think that the bananas produced on this island have a marked differentiating nature? Some ripeners have mentioned this to me…

All the Canary Islands produce bananas with extraordinary quality, resulting in the important demand that we have on the mainland and in the fact that end consumers know how to distinguish between a banana from other continents and our product. However, it is true that La Palma, as it is the most western island, has a milder climate and soils that are very favourable for this crop.

You also have two packaging plants in southern Tenerife.

Yes, we do. Cupalma has two warehouses there, one belonging to the cooperative and another that is rented. Tenerife allows us to be complementary during the winter production, when the greatest peak in demand occurs.

From your point of view, why have so many companies launched into the banana ripening business over the past decade?

Personally, I think that bananas are used as an added appeal, in a similar way to what happens with milk. For many marketers, it is a complementary operation in their portfolio when negotiating with the supermarkets.

And regarding the fashion that has been started in some large distribution chains to have their own ripening processes, as other retail giants in Europe do. What is your opinion?

I, myself, do not believe in this formula. In an organisation you can’t do everything. There is a sentence used by the Americans: “You can cut the middlemen out, but not what they do”. I suppose that Spanish distribution chains decided at some point that the ripening business was a goldmine, with huge profit margins. The reality is different: ripening is a very personal subject, which needs on site presence and continuous monitoring, including at weekends. This is the total reality and it means untold sacrifices by the ripener. It is a 24/7 job.

Where do the numerous supermarkets on this island of 80,000 inhabitants ripen their bananas?

I don’t think that on La Palma there is any justification for such large stores on an island where the population is not increasing. Our figures for university students are amongst the highest, but once trained, they do not come back and the island loses inhabitants.

PrevCoplaca: over 8 million kgs under the ash
“We must not forget to eat bananas from La Palma”Next
TE PODRÍA INTERESAR