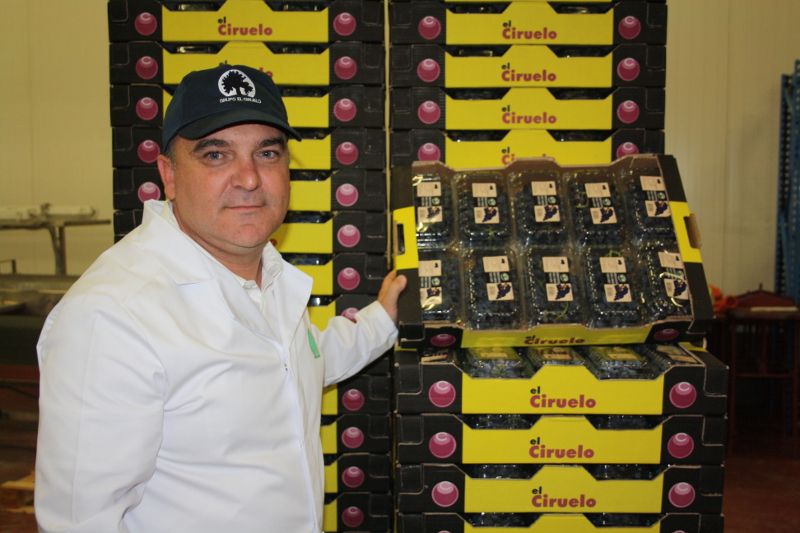 The El Ciruelo Group is coming to Fruit Attraction with an optimistic message, showing the consolidation of its projects.

The Group’s manager, José Velasco, talks to us about “becoming the talk of the town” in Europe with its grapes after a stone fruit campaign that survived the frosts due to the diversification of its crop areas. El Ciruelo has arrived with more confidence than ever, and with the clear intention of showing that they were right to back seedless grapes, but without leaving aside the markets that request Red Globe and Dominga grapes.

El Ciruelo is talking about consolidation, but in what sense?

In seedless grapes, because we can supply Europe from June to December with seedless grapes in the three categories, white, red and black. From now onwards we will be able to say that grape supplies from our producing region will be guaranteed, along with our service.

In seeded grapes, we are only continuing with the Red Globe in the red grape category and the Dominga in white grapes to meet some of our trade agreements with important distribution chains in Spain and Europe, as well as maintaining long distance export programmes with Africa, America or Asia.

And regarding the varieties with different flavours?

On some more mature markets, we are beginning to develop the flavour varieties, which we call gourmet varieties, but here in Spain, it is a bit early for this.

What production area do you have at the moment?

We are already dealing with around 1,200 hectares for table grapes and approximately another 1,200 for stone fruit.

Is El Ciruelo moving towards grapes instead of stone fruit?

Not exactly. They are two different projects and we are devoting the same effort to both of them. In stone fruit, we want to be the reference company in Europe in the early campaign and, to do this, we produce 30,000 tonnes between the 15th of April and the 15th of June, which is when our region comes into its own. And for grapes, we are going to consolidate our supply, since over the next few years we will reach around 50,000 tonnes, becoming a reference point as a private European producing company.

How would you report the stone fruit campaign?

It has been an important campaign because our property in Almeria, located on the coast itself, has been at full production and the truth is that we are very pleased to see that it has worked very well. We could start harvesting there from the 15th of April. Then the situation became slightly more difficult with frosts in the Cieza region, but thanks to the diversification of our crops, we were one of the companies that were least affected. In Molina de Segura the damage was not so great and in Alhama, where we have another property covering 400 hectares, which came into production for the first time during this campaign, no problems occurred either, since they are both warmer regions.

To top off the campaign, we obtained the export protocol to China, which means a great step forward to be at the forefront of the stone fruit producing companies.

At the moment, we are exporting 90% of our production to countries all over Europe, particularly England, Scandinavia, Belgium, France and Germany, without forgetting the 10% that remains in the important Spanish distribution channels.

At Christmas this year, will we have the exclusive design of the Puerta del Sol clock tower with the twelve seedless grapes?

Of course. We have been working on this project for four years now and every year there is greater demand for the product. I think that it represents great convenience for consumers and it is a very unique project.

PrevVegetales Línea Verde, a produce revolution
Maf Roda, 50th anniversary at Fruit AttractionNext
YOU COULD ALSO BE INTERESTED IN