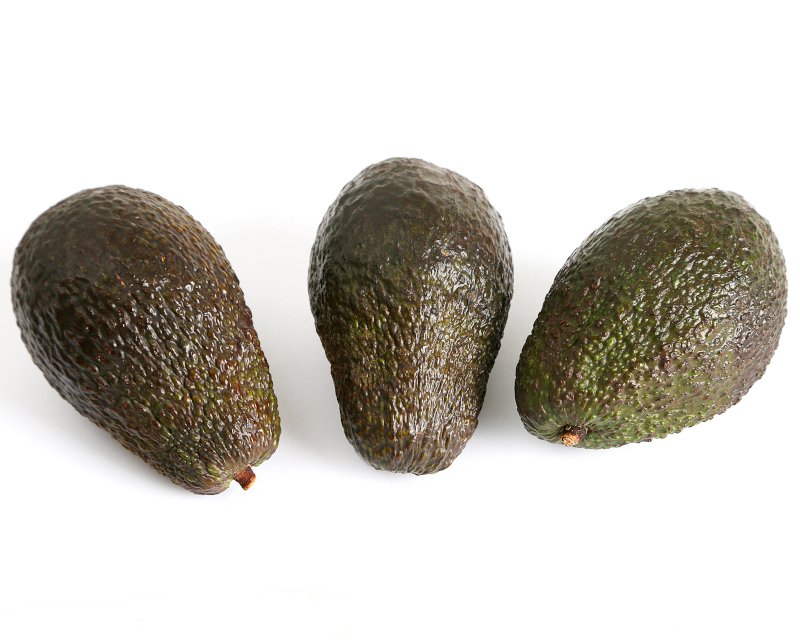 The avocado has become a ‘must’ on a global scale. Fruit Today analyses its import/export positioning

The avocado has now been positioned as just another fruit in the shopping basket (although in many countries it still has the tag of ‘tropical’ as a synonym for ‘exotic’). In just 10 years, world imports have shot up by 171.97% and for 2030 the global demand is expected to go from 2.84 million tonnes to 4.24. Will it become a commodity?

Although in general its price continues to be above the average of other fruits, its ‘pull’ varies a great deal depending on the country. In China, (a market coveted by exporters), its value has gone from 1.6€ per unit to 0.99, due to the greater offer and a reduction in duties.

In Mexico, the situation is diametrically opposed. It is the largest producer worldwide, with a record production of 1,997,629 tonnes in 2017 and 2.71 billion dollars in export value (virtually 45.95% of world avocado sales), according to the ‘National Agricultural Planning’ report by the Secretariat for Agriculture and Rural Development. However, Mexicans themselves, whilst being consumption leaders of this fruit, are being forced to leave it on the supermarket shelves due to its significant increase in price. In 2016 alone, the national sales dropped by 10%, amounting to a total of 0.8 million tonnes, around 6.1 kg per capita.

The agents and their public

Putting valuation aside, their production dynamism is also worth mentioning. And the fact is that there are more and more operators in this segment who are jumping on the ‘green gold’ bandwagon and the horizons are blurring. Mexico continues with its expansion process in the domain of Donald Trump, the priority destination of its avocados (almost 77% of the total), which experiences its annual sales peak thanks to American football, followed by the celebration of the ‘Cinco de Mayo’ (Fifth of May). According to the Association of Avocado Exporter Producers and Packers in Mexico, during the semi-finals and finals this year, it is calculated that around 120,000 tonnes of avocado from Michoacán were consumed. A more than telling example: at the Super Bowl a VIP box is reserved for this fruit. Additionally, it continues to grow on other markets such as Canada, Japan and China, with the application of specific promotion strategies. But the leader cannot rest on its laurels. One example: in China, Chile ousted Mexico in 2017, with 16,700 tonnes (50% of the total), as opposed to Mexico’s 8,800 and Peru’s 6,700, according to data from ProChile. 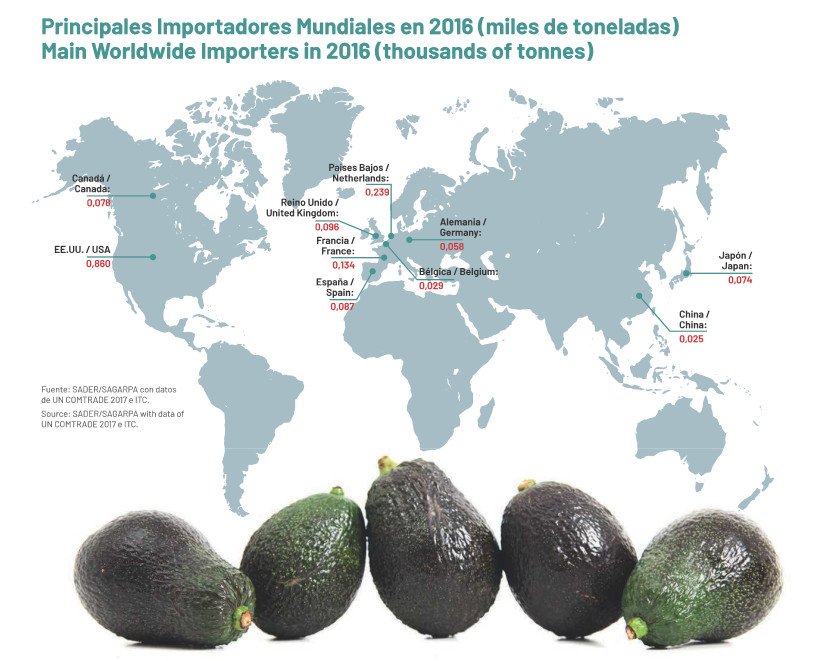 “Peru is the first exporter to Europe; Chile is the longest-standing producer and Colombia is growing very fast and is the only country that can guarantee the supply all year long,” summarised Daniel José Bustamante, chairman of Prohass Perú.

Although more centred on green-skinned varieties (mainly the Semil 34, making up 70% of the total), the Dominican Republic takes on the second place in production after Mexico, with almost 400,000 tonnes. As an exporter, its role is less relevant, holding the 12th position with a value of 30 million dollars per year, although it is true that this is rising with a 150% increase in foreign sales in recent years, as indicated by official sources during the meeting in which the National Confederation of Farming Producers started up the National Avocado Cluster.

Colombia, on the other hand, is the newest supplier. In recent years, it has been committed to increasing cropland at a rate of between 1,500 and 2,000 hectares per year, which will involve changes on the stage over the next few years. According to Colombia’s Ministry of Agriculture and Rural Development, it currently produces slightly over 400,000 tonnes of different varieties (although it only exports Hass) and 20,000 hectares, which places it in fourth position in the world production ranking. According to estimates by Corpohass Colombia, in 2018 it experienced a 37.73% growth, amounting to 73 million dollars, and it is expected that, in under two years, this will exceed 100 million. Currently, the Netherlands is its main destination, with almost 50% of the sales, and it is concentrating its efforts on the American market, after obtaining the health permits in 2017, as well as on Japan. It also exports to Spain and Germany, and it has recently entered the Saudi market.

Chile is a consumer country (one third of its production remains on the home market), but its exports grew by 14% between 2017 and 2018, according to the Chile Palta Hass Committee and in this campaign it will add another 8.85% compared to the previous year, with a total of 245,000 tonnes and 75,482 million dollars.

On the other side of the pond, Europe has its own avocado production area, Spain, which, with 10,000 hectares, holds the 7th place in the world ranking. Its main assets are the proximity and the high quality of its fruit, although water scarcity is slowing down the expansion potential in the crop-growing region par excellence, la Axarquía (Malaga) and la Costa Tropical (Granada). For this reason, farmers are looking at other areas such as Valencia, Cadiz, Huelva and even neighbouring Portugal.

Italy has started to see possibilities in Sicily and it already has planted 260 hectares.

Regarding consumption, “from 2015 to 2017, Europeans increased their demand by 20%. The annual average per capita was 1kg, with peaks of 2.5 kgs in the Scandinavian countries,” according to figures provided by Enrique Colilles, manager of Trops.

The United States is the main avocado importer. In 2018, the imported volume exceeded 1.1 million tonnes and the market representation was: Mexico (78%), California (12%), Peru (8%), Chile (2%) and others (Dominican Republic, Colombia, New Zealand). On average, every North American eats 3.4 kilos per year and spends 18 dollars on this fruit. To a large extent, this success has been motivated by product promotion. According to the Hass Avocado Board (HAB), in 2019 over 61 million dollars will be invested to increase consumption, with funds from a promotion share corresponding to approximately 5.5 cents per kilo marketed in the country. 85% of these funds will be used to position different sources on the market (Mexico, Peru, California, Chile, etc.) and the HAB will invest the remaining 15% in programmes aimed at converting avocados into the most popular product, through marketing and communication, health research and other information projects for the industry. “In the USA, people buy avocados for two main reasons: health benefits and flavour. The reasons for not buying them are because they are too expensive or they have quality problems,” explains Emiliano Escobedo, Executive Director of the HAB. “Over the next few years, we will continue to see an increase in demand, both in North America and in Europe and Asia.”