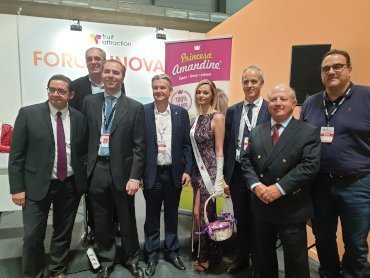 This potato, new on the Iberian market, in addition to promoting a brand, will also encourage local production

55 hectares are planned to be planted in 2020 in Spain and Portugal, all over the different production regions of Seville, Cartagena and Torres Vedras.

It is the first time that the Amandine variety, from France, will be grown outside its home country, but as Francisco Moya, chairman of the Spanish-French working group and manager of Negronor, points out, “we know about the growing awareness by European citizens to eat local or national produce, something that the French have been doing for a long time and it is one of the factors that has prompted us to produce Amandine outside France.”

The birth of the brand, ‘Princesa Amandine’, corresponds to the combination of interests by four marketers: Ibérica de Patatas in Madrid, Zamorano in Barcelona, Udapa in the Basque Country and the Portuguese company, Campotec. “We are starting from scratch because this potato variety, which belongs to the firm flesh segment, does not exist on the Spanish market. Therefore, our idea is to become a variety recognised by consumers and distributors in five years, with a positioning that includes quality produce, but for everyday use,” explains the chairman of Princesa Amandine Ibérica, Alfonso Saénz de Cámara, from the Basque Cooperative Udapa.

Sáenz de Cámara comments that the main aim of the new brand is to “promote eating the produce fresh so that, in Spain, as in other countries, more potatoes are eaten in a healthy way, in salads, boiled or as garnishes. For this reason, we have made a great effort to adapt the image of Princesa Amandine to the Iberian market and we will start up an important communication and marketing plan. This plan will include appearances on regional television channels, in the specialised media and actions at the points of sale.”

From Pom’Alliance (the French company that is granting the brand for the Iberian market), the executive Guy de Foucaud states that “the French association will be keeping a very watchful eye on the brand development, as well as the production in Spain and Portugal. It is a business model that we intend to continue in other countries, such as Germany and Scandinavia.”

On the other hand, the Spanish association is also taking on the supply of Spanish new potatoes for its French partners in the months when they have no production.

In France, Princesa Amandine has been successful for over a decade in the main supermarkets. In Spain, it has just arrived on the shelves of Alcampo and Lidl, although it will reach other distribution supermarkets very shortly. To celebrate its launch, Alcampo has started up a promotion where the brand refunds the purchase price to the first consumers buying the product.

In Spain, within the fruit and vegetable sector, the potato has historically been considered as a commodity. Many companies, along with countries in central Europe, have fought to revalue and promote their brands, but at present few have managed it. Although it is true that in recent years some of them have been making a significant effort in terms of added value and they are passing this on to the sector through important media marketing campaigns.

In 2018, the potato market moved 1,108 million euros, but it suffered from a 1% slowdown in household consumption. Its price increase (+5.1%), however caused a growth in value of around 4%.