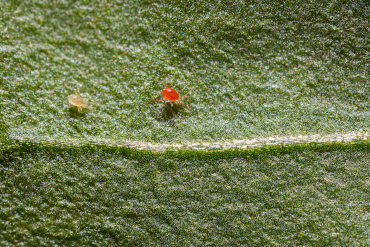 Spidex®, Koppert’s most popular biological solution throughout the world since it was created over 50 years’ ago, is now improving its efficiency in the biological control of red spider mites. The new generation is already available on the market with the brand name of Spidex Vital®, and it offers a higher degree of efficiency in the biological fight against red spider mites, thanks to the important innovations introduced by Koppert in the production process of the predatory mite, Phytoseiulus persimilis.

Spidex Vital® is the first Phytoseiulus that reaches the fields while still white in colour, because during its production it has not been fed with red spider mites. For this reason, for the first time it offers visual proof of its predation, as the predatory mite changes its colour from the initial white to its characteristic orangey-red after eating red spider mites. In practice, this offers clear evidence that Phytoseiulus preys on red spider mites and therefore, it carrying out its work.

In addition, Spidex Vital® offers improved control over the outbreaks of pests because it contains a more diverse population that is made up of all the mobile stages of Phytoseiulus in different degrees of development. With the new composition of Spidex Vital®, the search capacity of the predatory mites covers a greater distance during a longer period, as the adults are followed by nymphs in a growing phase, in a constantly growing population.

The new formulation and better nourishment guarantee a strong population of Phytoseiulus persimilis that gives infested plants the best start to attack the critical points. Spidex Vital® includes several development phases of mites, including eggs, young mites, growing nymphs and adults, for a prolonged, continuous activity on the crop.

The mites in Spidex Vital® start to lay their eggs immediately after being released. The females, which have been fed during the production phase, are already strong enough to develop their eggs and they can start laying them as soon as they reach the fields. Previously, they needed to feed in the fields first in order to be strong enough, eating red spider mites to develop their eggs. Due to the fact that they lay their eggs immediately, they have an improved capacity for laying more eggs during the same period of time, enormously improving the bio-control process and its efficiency.

In addition to innovating in the production process, Koppert has made substantial improvements to guarantee top quality of the product at all times, along with its availability. With the development of Spidex Vital® a new page is being written in the history of a legendary product, created 53 years ago by Jan Koppert, the founder of Koppert Biological Systems. Spidex® continues to be the worldwide reference in biological control of red spider mites, one of the most common agricultural pests.