“Time is running out for the fields of Murcia” 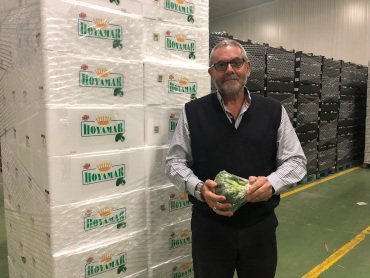 Minimum wage and water shortages are putting the feasibility of the sector at risk, according to Hoyamar

Effective, sensible and realistic steps. This is what a producing area as important at Murcia is demanding. The effects of climate change (clearly visible in the crops), the rise in the Minimum Wage (SMI in its Spanish initials) and the still uncertain effects of Brexit that will be finalised at the end of January are added to endemic problems such as water shortages. A seriously unpromising scenario that points towards the fact that “time is running out for the fields of Murcia. Be prepared.” This is Domingo Llamas, manager of Hoyamar’s categorical statement, declaring that “political games must be left behind and actions started up that help us to be more competitive.”

Tunisia, Morocco, Egypt… are just a few examples of producing countries with which it is impossible to compete if we are talking about labour costs. “And shipping by sea is making this competition even more difficult,” Llamas warns.

On the topic of Brexit and its consequences, we must wait to see how it all turns out in the end, although it is clear that, with the current working hours of the Customs offices, it will be difficult for companies when exporting perishable goods. “A regulation of the working hours is urgently needed. We will not be able to work as we do now if the customs officials are only on duty until 2 pm and the offices are also closed on Saturdays and Sundays. This takes away a day of the product’s shelf life.”

Aware of the current economic downturn, the manager of Hoyamar explains that the company intends to face up to “this process of change, this bubble, by concentrating on holding on to what we have got. We must stop and think.”

In the new campaign (they produce 12 months of the year and their tax year starts in October), they foresee reaching figures that are similar to last year’s: between 10-12 million kg of broccoli, 20 million heads of Iceberg lettuce, 15 of Little Gem and 10 of Romaine, in addition to smaller amounts of Lollo Rosso, oak leaf, endives and the bio segment, with around 50,000 kg per week of broccoli and cauliflower.

The company’s processed produce project also continues alongside the fresh produce line. This was started up 4 years ago with leafy vegetables that are prepared in the company’s new premises, along with broccoli and cauliflower florets.

PrevRedi, extra innovation in brassicas
Unexport, on the riseNext
YOU COULD ALSO BE INTERESTED IN