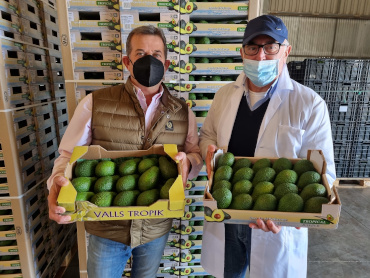 The company from Betxí (Castellón) has just started out on its journey and hopes to market five million avocados over a three-year period.

The company’s manager, Vicente Bayona, who has extensive experience in this category, saw a very clear opportunity with the company’s location. “We are in the middle of the crop expansion area and logistically we are two steps from the Mediterranean motorway and very close to the ports of Castellon and Valencia, as well as next to the important distribution platforms for the largest supermarket chains in this country. Our working methods mean that everyone wins because we gain in efficiency, in costs and the environmental footprint caused by transport form Malaga is reduced.”

Bayona comments that “we have the capacity to market product between five and six months of the year, with the Hass and Lamb Hass varieties. For this reason, our logo emphasises their origin: “Aguacates del Mediterráneo. Valencia/Avocados from the Mediterranean. Valencia”.

The most northern crop in Europe

The company from Castellon brings together the most northern-grown Spanish avocado productions. Their corps spread from the Valencian region of Les Valls, passing through Pla del Moro, La Magdalena until reaching Benicàssim.

Amongst the company’s main clients, the demanding Swiss, German and French markets stand out as historic consumers of this product.

The goal of Tropical Bayper involves consolidating itself as a reference in the sector in this expansion area. To do this, in the near future it will undertake new investments in ripening and pre-cooling rooms. In addition to Valencian avocados, the company takes a look at the Canary Island tropical fruit due to their excellent quality and it markets papayas and avocados from these islands.

But it is not all plain sailing in this booming avocado sector. Bayona describes how the window for Spanish avocados is getting narrower every day due to crops from third countries (Tanzania, Colombia, Peru, etc.), which are not subjected to the same healthcare controls as the Spanish fruit. On this point, the persisting difficulties with logistics and the rise in costs on all the links of the chain must be added, costs that have yet to be assimilated by the large retailers.

“The demanding protocols about residues cost farmers and companies a great deal of money. They are absurd because we then eat avocados that have not passed through these filters and, what is more serious, the imports have brought in pests that previously did not exist here, such as crystal spiders, red mites and aerial fungus. At the ports (Rotterdam and Algeciras), the necessary inspections are not carried out due to a lack of personnel. All of this without comparing the working conditions of our workers, which in no way are similar to those in the aforementioned countries.”

“If we want the agrarian sector to survive, and we are already seeing what is happening with the citrus fruit growers in the region, we must demand reciprocity in our imports; if not, there will be no long term future and we will become a country dependent on less developed countries. Losing food sovereignty is a very serious question for Europe, but it seems that in spite of having lived through a pandemic, in Brussels they do not realise that we are a strategic sector and Spain has the natural conditions to continue to be the productive head.”

In the same vein, the executive emphasises that at the moment there is a great deal of talk about reciprocity with citrus fruits, but “we are forgetting the avocado imports. Cold treatment, which can prevent healthcare problems, is also not used for avocados.”

PrevBASF: quality with resistances
Tropical fruits are taking over HuelvaNext
YOU COULD ALSO BE INTERESTED IN