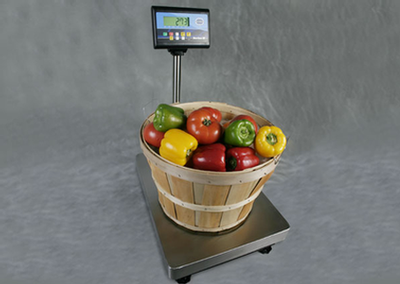 When Corey Farms established its own packing facility after years of sending its sweet potatoes and watermelons to be packed elsewhere, they were faced with some serious weighing challenges. The Robersonville, North Carolina farm was using a simple (but inaccurate) eyeballing method to fill boxes. To ensure it did not short its customers, it wound up overfilling the boxes and shorting itself instead! After selecting new scales, Corey Farms has settled into a packing process that provides good value to customers while ensuring they do not give away their product. They estimate they paid for the cost of the scale in about a week by avoiding overfilling boxes. And that level of savings is no small potatoes.

Corey Farms is a 5th generation family run farming operation located in Robersonville, North Carolina. The Corey Produce branch of the company grows sweet potatoes and watermelons. About 75 percent of the sweet potatoes are sold for export, primarily to the Netherlands, with 25 percent sold to domestic grocery chains. The watermelons are all sold domestically, to chains like Walmart, Sam’s Club, Foodline, BJs, and Costco.

Corey Produce opened its new packing facility last summer, after more than a decade of selling its produce to a packer located nearby. Corey’s new facility ships in two box sizes: a 40 pound carton box and a 500 kilogram (1100 pound) box.

Lee Corey, who manages the produce side of the business, explains that he turned to Fairbanks Scales for recommendations on which scales would be most effective for their operations. The company had worked with Fairbanks for years for scales and other equipment used in the tobacco part of their business.

The new packing facility has a bulk line where the sweet potatoes are washed, graded, and sized. As they are sized, workers fill up the 40 pound carton boxes, “guesstimating” their weight and then putting on the lid.

For this application, Fairbanks recommended they install a Fairbanks Series III general-purpose bench scale with built-in rechargeable battery and integral pillar-style instrument. The Series III has a tube frame construction and removable stainless steel platform. It is a well-known scale, used throughout the industry. Fairbanks recently added a roller ball top, so workers can place a box on a conveyor and roll it all along the line so they never have to pick up the boxes. With the battery backup, Corey can even carry it into the field and set it up for use on the back of a pickup truck if necessary.

Corey placed the Series III bench scale with roller balls at the end of their conveyor line. Operators take the 40 pound carton box, fill it and slide it down the scale. The scale weighs up to 150 pounds in increments of .05 pounds. If the box weighs more than 40 pounds, operators remove potatoes to get as close the target weight as possible. The scale is used with a large 1-inch backlit LCD display enabled with auto shutoff timer and an RS232 serial interface.

For the first six months Corey packed the large 500 kilo boxes, they visually estimated the contents. “We would fill the boxes up until they reached the top to make sure each 500 kilo box held more than the required amount,” said Lee Corey. “We knew that would lead to giving away some product, but we wanted to make sure there was at least a little extra, because most of the sweet potato are going for export so we felt it was important there be no question of inaccuracy.” (Of course, none of their customers in the Netherlands ever commented on the overage.)

After six months of “guesstimation,” Corey Produce decided they needed a scale to ensure the 500 kilo boxes were accurately weighed. “Without an accurate way to weigh the product, you can end up shorting the customer or yourself,” says Lee Corey. “We wanted to give our customers what we promised, but if they are only paying for 500 kilos, there is no need to send 520 to 540 kilos.” One shipment may contain as many as 20 to 25 of these boxes. If each box is over by just 20 kilos (44 pounds), they were potentially giving away about 1000 pounds of sweet potatoes per shipment.

The scale is used by forklift operators who are constantly setting down the 500 kilo boxes. Therefore, it had to be extremely durable to avoid damaging the scale’s load cells. For this application, Fairbanks recommended the use of an Aegis 4-foot by 4-foot, 5,000 pound industrial mild steel floor scale. The scale is equipped with an FB 1100 Series instrument, which comes with a highly visible 2-inch backlight LCD. Either pounds or kilogram units of measurement can be selected. The instrument is mounted on the wall above the scale. It can sit on the forklift, so when the box is set, operators can see what it weighs from the forklift.

Lee Corey notes that the weight of the first box they weighed after installing the new floor scale was 539 kilos. “If we were off by 39 kilos on each one, and we probably do 40-50 a day, that can really add up to a lot of sweet potatoes.” Now, instead of packing 520-540 kilos per box, they can get it down to about 503-504 kilos, with just enough overage to ensure they meet the required weight. Corey estimates removing the excess paid for the cost of the floor scale in about one week.

He adds that right before their season ended they had a few customers who wanted smaller 6-kilo boxes for use as a display box in a grocery store. “Another useful feature is that we can switch from pounds to kilograms easily. So if we need to weigh a box and use it to measure a standard, we can switch back and forth and do either one.”

This year they also began packing watermelon in a separate packing facility within the same building and purchased new scales for this operation. The watermelons are fed down a long belt, past brushes that clean off the sand from the field. After that they go down another long belt with seven scales that are used to weigh them and separate them into three different sizes.

In addition to supplying the scales, Fairbanks also provided setup and calibration. Corey Produce is required to conduct a strenuous food safety audit for both its watermelon and sweet potatoes operations. As part of the process, the scale must be calibrated and documented. Fairbanks performs the calibration and provides the proper documentation for Corey to give to the inspector. They also perform calibration once a year before the sweet potato and watermelon seasons start just to check the scales and make sure they are ready for the season.

“We have been extremely satisfied with Fairbanks’ during this entire process,” concludes Lee Carey. “They provide maintenance and help us if any issues or concerns arise, and the scales they recommended are working very well for our business.”

“Working alongside the distribution would be more advisable”

“Prices won’t make up for the lack of kilos”