Origine Group, kiwis and pears from Italy into new markets 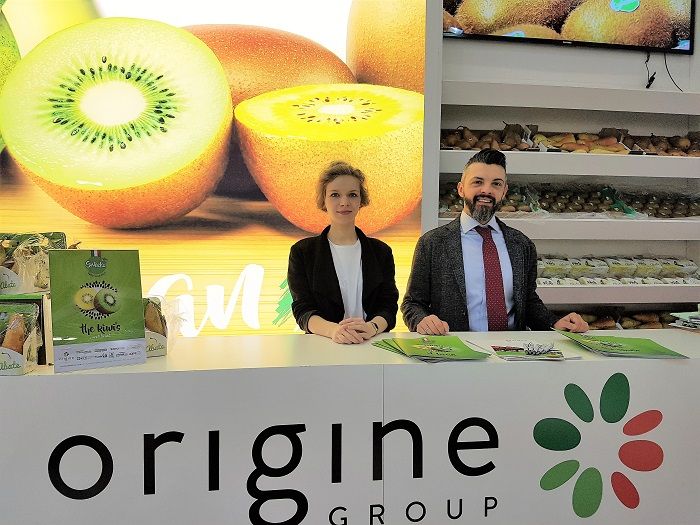 Origin Group has made an assessment of its participation in Berlin Fruit Logistica 2017 after last year’s debut. There’s a lot of satisfaction from the general manager Alessio Orlandi, present in Berlin with the sales manager Reen Nordin. “The launch of the two brands, Sweeki for the kiwi and Pera Italia  for pears has had an excellent response during the three days of the Fruitlogistica,” says Orlandi. Sweeki, the new brand with premium quality launched by Origine Group last October in Madrid on the occasion of Fruit Attraction, has raised the interest of new markets and new potential customers. “Thanks to the contacts made during the fair, we will send samples to new customers by approaching new markets, such as to the Caribbean.”

Successful also for the brand Pera Italia: ” The new contacts from Far East buyers we met in Berlin, have appreciated the quality of the product and they are waiting to be able import our fruits. Interest towards the Spanish markets to which we will send samples to prepare for the entry into the next campaign. There is also strong interest encountered by some Italian players who said they were interested and willing to follow Origine Group for development of the brand in national market. ”

As for Sweeki “we are working to enter in the Spanish market with the final two trading approaches: wholesale markets and supermarkets. Whoever believes in this project – ends Orlandi – will have our support in terms of marketing to enable him to reach the final consumer with full knowledge of the characteristics of the product and guarantees that only a large group like ours are able to offer. ” The positioning of Sweeki kiwi in the premium segment is tied to a specific production strategy which provides a high degree of brix and a strict selection”.

After a series of meetings with importers and distributors of the Iberian Peninsula have taken place in recent weeks and culminated in Berlin, Sweeki is ready to take its first steps in the Spanish General Markets. “The debut is scheduled to Mercamadrid in March, where we are planning a series of promotions including the installation of custom desk with promoter Sweeki and a advertising campaign with the brand’s visual. Origine Group represents 25% of national production of kiwi and 20% of European production, and is the second largest player in the production and marketing of kiwis, with 125,000 tons of products and 6,000 hectares of farmland”.

The consortium Origine Group was founded August 2015 from the strategic alliance between nine leading companies in Italy and Europe in the production and trading of fresh fruit and vegetables. The consortium – established by Afe, Apofruit, Fruit C2, Gran Frutta Zani, Kiwi Uno, Op Kiwi Sole, Pempa-Corer, Salvi-Unacoa, Spreafico – represents companies already firmly present on the domestic and international markets, with a total turnover of about 800 million euro, which have joined their resources to provide a top quality product, working together on innovation and new varieties to look out into new emerging markets. This new alliance of Italian leading companies begins focusing its interest in two outstanding products of national fruit and vegetable basket, pears and kiwi, but the goal is to widen the interest also in other products. The production potential is over 2 million tons of kiwi and pears. Two brands available: Sweeki for kiwi and PeraItalia for pears