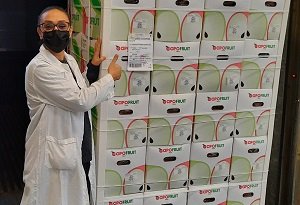 Thanks to the signing of the phytosanitary protocol between Italy and the Asian country. The shipment is a test that could lead to the emergence of a very interesting market.

The first container of Apofruit Italia apples is on its way to the Taiwanese wholesale markets. A success for Apofruit, which has members and factories all over Italy, this development is above all a result of agreements between Italy and Taiwan, which have signed a phytosanitary protocol to which the apple producer associations have also actively contributed.

The signing of the protocol gives the green light for the export of Italian apples to the tiny Republic of China. “This is a shipment of Candine® and Fuji® apples, which, according to our research, should be the most popular with Taiwanese consumers due to their characteristics,” explains Romina Kamel, of the Apofruit Foreign Sales Office. It is a market with sophisticated tastes that prefers sweet, large-sized fruit. Indeed, we are sending sizeable apples that are also the most sought-after on the Italian market.”

The Apofruit apples travelling to Taiwan, which amount to 20,000 thousand kilos divided into 18-kilogram packages, are produced in Emilia-Romagna and are a test that could lead to a very interesting export market in the coming seasons. “Our apples,” explains Romina Kamel, “are almost at the end of the season and if the test produces the desired results, a new shipment could be sent in September/October”. Italian apples will naturally have to face competition from China and France, however the quality of the product selected for this market could pay off. Apofruit has set itself this further challenge in order to give its members the opportunity to increase their earning potential. Photo: Romina Kamel – Apofruit Italy Foreign Sales Office.

medFEL gives the floor to producers