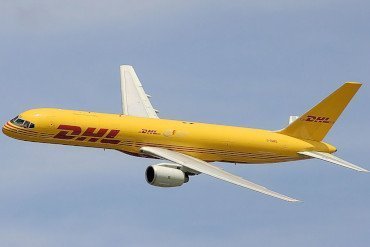 The chaos in air traffic is also affecting fruit and vegetables. Since the start of the COVID-19 crisis, air freight has tripled in cost.

The difficulties of land transport are now joined by air freighting problems for Spanish exports.

Spanish bilberry sales to the Middle East and Asia have been seriously affected and the complicated air freighting situation also extends to stone fruit going to China and South East Asia.

Fruit Today contacted Hicham Nader, regional manager of DHL Cargo, who explains that “this is a completely unforeseen situation, with worldwide effects, without enough information and which, logically, generates great concern. DHL Cargo has informed exporters that the increase in freight prices is not a whim, rather it is due to a case of force majeure, because air traffic has been greatly restricted and, in many cases, we cannot respect the previously agreed upon routes.”

In Spain, fruit and vegetables that are exported to distant destinations mainly travel on passenger flights because there is not a large fleet of cargo planes and the flight restrictions at present are plentiful.

To corroborate this example, and after the mass cancelling of flights worldwide, the executive explains that his team is endeavouring to find new routes, although this is not easy: “we have spent over 48 hours looking for a way to send orders to Malaysia. It is a true odyssey, but it also is not easy to land in Singapore or Hong Kong, although at these destinations we can still find alternative routes.”

Some Spanish companies are looking at the possibility of using other departure airports in neighbouring countries such as France, Portugal or even Luxemburg, but this means an added cost of road freighting and, what is even worse, the situation is becoming generalised and the difficulties are becoming global.

Many airlines have cancelled their flights and others have had them restricted. The company from Abu Dhabi, Etihad Airways, has cancelled all its flights, as have Cathay Pacific via Hong Kong, Emirates Airways via Dubai and Cathay Airways via Doha.

Against the air freight crisis: solutions

When faced with a serious crisis such as the one we are experiencing, DHL Cargo has a solution-searching element in its DNA. “Solutions which, at times involve putting out fires in highly stressful, unforeseen situations and others, which include sustainable approaches over time. DHL is working on different scenarios according to the seriousness and length of this crisis. In fact, since last week we already have some alternatives for the most critical routes, and we are able to serve in the most satisfactory way possible.”

“Our network in Europe allows us to hire additional aeroplanes for freight to ensure both imports and exports in European airports, as well as establishing our own routes,” the executive explains.

“The crisis that affected China and Hong Kong three weeks ago has now become the opposite problem. We have gone from a problem at the destination to a problem at the source, because Spain is now confined and, as it is affecting a sector of perishable goods such as fruit and vegetables, it is very serious.”

How much do the freight costs influence the sale of a fruit or vegetable product?

As opposed to what happens in other services such as pharmaceutics or industry, the incidence of a very high freight cost has extraordinary repercussions on the end price of a fresh product. Accordingly, Curro Olivar, executive from Frutas Olivar explains that “the current freighting costs are a real handicap for selling produce and we should possibly look for other market alternatives. We have spent many days trying to export asparagus to Asia and it is a real odyssey.”