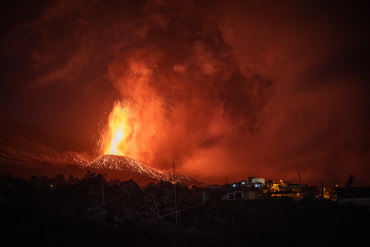 The banana crop on the “Isla Bonita” is experiencing its worst imaginable crisis, but the resilience and strength of its people will allow it to survive

Domingo Martín, Chairman of the Association of the Organisation of Banana Producers of the Canaries (ASPROCAN) asserts this.

The overall losses on an island of 83,000 inhabitants reach around 1,000 million euros at present, according to the authorities. The island’s main resource is the primary sector, and specifically, banana-growing, which makes up over 50% of the GDP of the island’s economy.

“At Asprocan we are experienced in overcoming difficulties; it might be our island nature that gives us this resilience. This is possibly the worst moment experienced to date, although not the only one, because when the banana OCM came into force in 1993, nobody expected us to last more than five years.”

The latest calculation by the Copernicus satellite system indicates that the lava has devastated 1,241 hectares, as well as 4,300 buildings of all kinds (industries, banana packaging plants and family housing).

Of these, there are almost 400 hectares of bananas trees, some of which have been completely cut off. These figures represent 30% of the island’s banana crop, the second in production in the archipelago, only exceeded by Tenerife, which has a surface area that is three times greater.

The Cumbre Vieja volcano preyed on the most productive area of the island, where the greatest concentration of banana crop was to be found, in the Valle de Aridane and Fuencaliente. In the former, the losses reach around 90% of the production of the year in progress and over 60% in Fuencaliente, in the southern part of the island. A percentage of this, yet to be evaluated for 2022, has also been jeopardised.

The volcanic eruption, which has lasted three months, also occurred at one of the peak moments of the harvest and has caused problems with the ‘hijería’ (a natural process of the plant, when it is replaced by its offspring) and the survival of the crop for the future. In a two-month period, it was the second setback faced by the farmers: the first is due to climate change, because in August a temperature of 47 degrees was recorded, which caused over six million in losses.

During the 90 days of the eruption, the farmers have faced up to great challenges and never-ending days of work in extreme conditions with the only aim of saving a little piece of land which, in some cases, they owed to the bank. Many took over three hours to reach their plantations, when the army brought barges in to link up coastal towns (Tazacorte with Puerto Naos) and allowed access by foot to the plantations. At one point, the island had over 90 km of roads that were blocked by lava, the blanket of ash or by the destruction of buildings.

Once there, with the ash as their faithful companion, new work processes had to be implemented that made the situation even tougher, if possible. In some cases, the situation became even more strained due to broken pipes and a lack of irrigation for weeks on end. The workers were living under permanent stress, not only because they had lost their homes or had been evacuated, but because they could lose the piece of land that supported their family.

Over 40 million cubic metres of ash have fallen onto the island and consequently, onto its crops and an agronomic situation that had never been seen before had to be tackled. The majestic leaves of the banana trees, covered in ash, could not carry out photosynthesis; the soil needed other fertilisers, etc. It all made up an unknown equation.

The non-stop shaking of the volcano 24 hours a day, and the permanent assault of a wave of earthquakes which often obliged the islanders, under advice from the authorities, to live with an emergency rucksack ready by the front door.

Additionally, farmers were first-hand witnesses of how many of the banana packaging companies that marketed their fruit were buried under the lava. A lava flow that has been measured at around 130 million cubic metres.

Under threat from the gases

Although the eruption has officially ended, within the exclusion area there are high concentrations of gases, which, according to the Military Emergency Unit (UME in its Spanish initials) “would only take 30 minutes to kill a person.”

The gas is mainly carbon monoxide, a gas that also emanates from the half-buried houses and the cracks opened up in the ground. This is just one of the reasons for which the island’s population will have to bear many weeks of risk, according to sources from the PEVOLCA (Canary Island Volcanic Emergency Plan).