Joan Serentill (Benavent de Segriá, 1960) has had his pilot’s licence for over 30 years and flying, along with golf and skiing are his favourite hobbies. 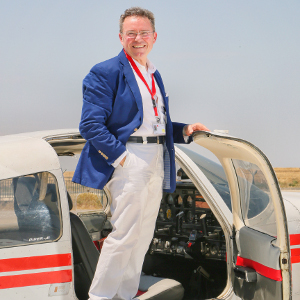 Never has it been more appropriate to say that this is a profile of a high flyer. A large part of the interview took place on board a Piper Archery at an altitude of around 3,000 feet. 58 minutes flying over the districts of Lerida ending with the impressive panoramic view offered by the convergence of the Segre and Cinca Rivers.

Joan Serentill (Benavent de Segriá, 1960) has had his pilot’s licence for over 30 years and flying, along with golf and skiing are his favourite hobbies.

Joan came to our appointment impeccably dressed, like 1950’s charmer who reminded me of the pilots from the inter-war films. From the very beginning, he was chatty, friendly and I soon had the feeling that he was going to make things easy for me.

Having obtained the appropriate clearances, we went into the Lerida-Alguaire aerodrome. After a few minutes wait in the air controllers’ room looking at maps and navigational charts, we finally moved on to the hangar.

Before our flight, Joan carried out a meticulous exterior examination of each part of the aeroplane and he checked the fuel in each wing.

Excuse me, why are you so interested in the fuel?

Everything has been planned for, but the pre-flight checks are sacred for pilots. And that is as it should be. Did you know that most accidents occur due to lack of fuel?

Inside the cabin, Serentill makes his notes in the flight log; he checks the screen instruments and tries out the plane’s circuits. Finally, I hear the radio telephone alphabet.

Excuse me, but this is the first time I have flown in a plane of this type and I’m a little overawed. Is it true that there are air motorways?

Of course, and in Central Europe there is an area with an important concentration of them, but the planes fly at different levels. In this case, don’t worry; we are not going to collide.

If I have understood you correctly, you spent over a decade in competitions, in aerial rallies. What do they involve?

Basically, they are very similar to rallies on the ground. They combine both accuracy in landing and navigation skills, that is to say, chronometer and orientation. The pilot decides on the speed, in such a way that for each second that you are above or below the established time, you are given a penalty point.

What level did you reach?

We won a Championship of Spain and we had the option to go to the World Championships, but I had to decline because it was in the summer, the time of year when we work hardest on the family farm.

And motorised gliding is also thrilling: you take off with the help of the engine, but then you stop it and glide, helped along by the air currents. It is a real challenge against nature and gravity. We had one of these planes for seven years.

When did you get bitten by the flying bug?

When I was very small. My father did his military service in the aviation corps in Reus. I always imagined him as a great pilot, although he was just a corporal. When we played in the street, which was normal in my youth, I didn’t want to be a cowboy or an Indian, but rather an air force general. My mother told me that she bought me a jersey with some wings on it and I never wanted to take it off.

You use a plane in the same way as I use a car, don’t you?

Well, not as much, but there are some advantages to being a pilot. I use it as a work tool because I like it and I avoid the traffic. I fly over the farms and I have gone to many Pink Lady meetings by plane. I collected my colleagues from Giropoma and we went to France. Of course, we also have gone on holiday to Mallorca, Ibiza with the whole family. My son played in the plane just as children play in a car.

Some people have all the luck! Tell me a story about it.

There are many, but I’ll tell you this one. My wife was so used to flying at a time when we flew a great deal and we were driving along in the car in silence, along a national freeway with a continuous line and suddenly she said: “Joan, why don’t you take off?

I suppose it is absurd to ask you what profession you would have chosen if you had not become what you are?

Indeed, the answer is a pilot. But the truth is that, with my feet on the ground, I feel like a farmer.

I have found out that you are the interim manager of Fruilar.

Ha ha, yes, I am a temporary employee and I have lost count of how long I have been temporary. One day the Board of Directors told me to take care of this and here I am. The truth is that I find all the management tasks regarding production fascinating, but in an ever-changing world, I think that continuous training is a very necessary element. In a job as fantastic as this one, the only thing missing is earning some money!

And you continue training.

I try to. A short while ago I did a post grad in Agrifood Business Management, which, amongst other things, allowed me to give a name to the activities I was already carrying out in Fruilar. And two years’ ago I was in Manchester, carrying out a “home stay” to improve my English.

Do you come from ‘Catalonian farming stock’?

Yes, totally. My family has always been tied to the land and it was one of the first in the region to start up in the fruit growing business. Although it is true that my parents were true entrepreneurs with a head for business. My grandparents had a small grocery store, which later on my mother extended with other sections: clothing, perfumery, etc. and where a little of everything was sold. My father worked a double shift. He got up very early and went to the farms and when the workers arrived he told them what they had to do and then he changed his profession in the city. There, he was engaged in real estate, during a time of great expansion. The family’s real estate in the city dates from this time.

Finally, once again on the ground.

PrevProexport turns 40
This summer, the ‘Estrellas’ will not restNext
TE PODRÍA INTERESAR