Fashion and pre-cooked convenience food, two references of the rise 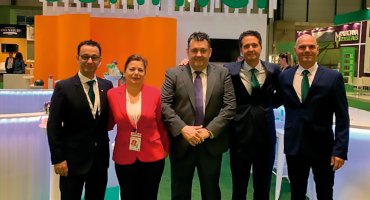 Watermelon is the second most important product for the Surinver cooperative which, in addition to its traditional California peppers, has made important investments in the pre-cooked convenience food range and biological produce.

Fruit Today had the chance to talk to Javier García, the company’s sales manager, who explained each of these options.

How is the Fashion watermelon campaign developing?

Greenhouse watermelons have behaved positively; now we are starting with the open-air plantations, which are showing very good quality and we hope that the demand keeps up. Everything is pointing towards the fact that we will have a similar volume to last year. Watermelons are our second most important product by volume, after California peppers.

In 2019, overall Surinver marketed a total of 67,981.89 tonnes, of which just over half (51.08%) belonged to different California pepper varieties. In second place, Fashion watermelons represented 14.23%.

What are the results for bio at Surinver?

We have made a clear commitment to ecological produce. At present, it already represents 30% of our pepper, celery or pumpkin crops and in 2022 it will make up 50% of our production.

For this reason, within our goal of promoting sustainable farming, we offer a wide variety of Bio products, both in fresh produce and in pre-cooked convenience food. This assortment is showing a very positive trend, with a 53% increase in invoicing compared to the previous year’s results.

Where are your bio California pepper markets? And the volumes?

The main markets are Germany, France and other central European countries such as Poland. In 2020, a volume of around 10,000 tonnes of bio peppers will be produced.

What expectations are there with the ‘ready-to-eat’ products now that the confinement has ended?

The behaviour of pre-cooked convenience food has been surprising in this confinement period as sales have increased by 18.8% since the declaration of the state of alarm. We suppose that this could be due to the longer shelf life of the products compared to fresh produce. There were moments of uncertainty, and consumers backed these products.

The products most sought by clients are the ones that already stood out as our brand’s top sellers, such as natural grated tomato and roast peppers (both as whole peppers and as strips).

Additionally, during this period sales increased by 39% for our bio product line, under the brand name TROPIC, which shows the increasing awareness and concern by consumers for the environment.

The FoodService line within our pre-cooked convenience food range was launched in 2014. It was developed taking into account the specific needs of the HORECA sector, with some characteristics adapted to this sector, such as larger formats, convenient and easy to use, always looking to simplify their work, as well as minimising handling costs.

In the medium term, in pre-cooked convenience food, we have some highly interesting new proposals adapted to the Horeca channel.

In general, what is the cooperative’s export volume for fresh produce?

Export makes up 70% of the cooperative’s fresh produce sales and the rest goes to the home market.

How are the Surinver stores developing? Are there any plans for new openings?

The point of sale located in its own installations was the first to be established in 2011 and it was born with the aim of covering the demand both for the company’s personnel and for people living in the area who also asked the cooperative for sales to retailers. In view of how the store was received and how well it worked, the cooperative decided to open new points of sale in areas near to the Head offices.

In 2014 the second Surinver store was opened in the centre of Pilar de la Horadada. In 2015, a new store was established in the neighbouring town of San Pedro del Pinatar. The fourth point of sale was opened in San Miguel de Salinas in 2017.

No new points of sale are planned to be opened in the short term.

PrevThe future, more ‘eco’ than ever before
“We keep growing alongside our clients”Next
YOU COULD ALSO BE INTERESTED IN