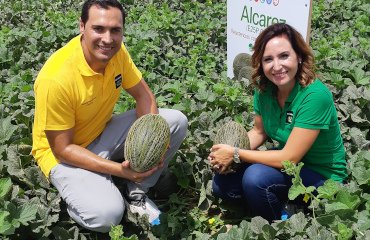 Enza Zaden is closing the Piel de Sapo cycle in Murcia and adding new developments in yellow and Galia melons.

Enza Zaden’s Melon House Fair takes off from the 30th of June to the 10th of July with a completely new format adapted to the current situation, giving priority to safety. “We are still on the move, growing alongside our clients, to create value together and to make the sector grow.” To do this, they have extended the length and they will mobilise all kinds of resources (using www.melonhousefair.com, virtual 360º tours, webinar, product dispatch…). “We expect a larger number of participants from all over the world,” affirms Genci Armero, head of melons for Iberia.

In Piel de Sapo, they have extended the line with materials for the medium-early segment in Murcia, maintaining the quality, flavour, presence and resistances. This last aspect is essential because “fewer and fewer plant protection products can be used and our genetics mean that we have strong plants with resistance to powdery mildew and aphids without losing any flavour or production.” All their new materials include these properties. Such as the latest one, Campuzano, for medium cycle in Murcia, which comes before Alcarez and Osorio (the only one without these resistances.)

“In La Mancha, Alcarez and Almadén are the most popular varieties. They are very well received because they stand up to the differences between day and night temperatures and they do not split.”

Another of the new developments in Murcia is the yellow Piel de Sol (early) with resistance to powdery mildew and aphids and which, along with Ambarino, closes the cycle in Murcia and La Mancha.

In Galia melons, the sales in Almeria of Estelar and Ancestral are moving at a good rate. “Very homogeneous, with significantly sturdy plants and optimum yield, grooved from the first to the last with easy identification of the cutting point, along with good flavour.”

For Murcia , Medial is the most significant introduction in early-medium cycle, with resistance to aphids and it is followed by Tribal and Abisal.

Regarding their Cantaloupes, all of them have resistance to aphids. Miramonte for Morocco stands out, which continues to work very well in its third commercial year, “due to its endurance without losing any of its flavour.” Highly productive, it has good presence and arrives at its destination in perfect condition.

For Almeria they are offering Enzor (medium cycle), which is very homogeneous, flexible (greenhouse and open air) and productive. “It maintains a very good calibre, and it can be planted from the end of February in regions close to the sea, to mid April in Murcia.” Clamor (medium cycle) and Sucredor (late cycle) complete the cycle in Murcia and La Mancha.

Makeba (late cycle) stands out in the Charentais type. This is its smallest variety in Spain, with very clearly grooved fruit and are resistant to aphids.

At the same time, they are developing black watermelons in sizes for the national market and for export, along with white ones for export.”