“Go eco: it is good for you and it tastes better” 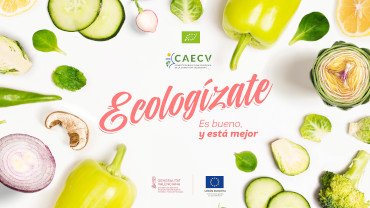 The ‘CAECV’ is starting an online promotion campaign to support the ecological sector in the Comunitat.

The Ecological Agricultural Committee of the Comunitat de Valencia (CAECV, in Spanish), the organisation in charge of controlling, certifying, representing, defending, investigating and promoting ecological produce from Valencia, has started up an online promotion campaign to support the ecological sector in the region.

With the title “Ecologízate: es bueno y está mejor” (Go eco: it is good for you and it tastes better), the CAECV wants to highlight the tireless work by the over 3,500 operators who hold certificates and who, in the COVID-19 pandemic situation being suffered by the entire world, have shown, more than ever, that the ecological sector is essential for society as a whole.

Up to the challenge

“Health, consumption, quality and marketing of ecological products are the four main focal points of the campaign,” the chairman of the CAECV, José Antonio Rico, explains. Moreover, he feels that “our producers and companies have risen to the occasion to meet the expectations due to the circumstances, and they have shown why the ecological sector of the Comunitat de Valencia is one of the strongest and most powerful throughout Spain.”

The CAECV has deemed it appropriate to launch a campaign of this type and at this time owing to the social awareness existing after the appearance of the COVID-19. “All the indicators have shown that the consumption habits are taking aspects such as health and local produce consumption into account more than ever before. The ecological sector has a great deal to say in this area and we are asking ourselves what would have happened to the people of Valencia’s shopping baskets if production were to depend on third countries,” Rico explains.

The slogan chosen for the campaign starts with the creation of a new verb, “ecologízate” (go ecological). It is a reflexive verb in Spanish that invites ecological produce to be consumed and even more so in a situation where society is changing its consumption habits and an increase in the consumption of ecological produce has been proven, mainly due to greater responsibility for health and for the sustainability of the planet.

The slogan is accompanied by a fresh, new graphic campaign that uses images that are easily recognised by consumers and that intend achieving the effect of “going ecological” towards all the different product ranges on the market.

In short, it is a campaign that is aimed at extending the current consumption niche for ecological products and extending it to the entire population.

“I am convinced that health is one of the concepts that are going to come out of this health crisis stronger and, for this reason, society is becoming aware of the importance of keeping healthy. Therefore, the campaign’s goal is to accompany consumers in their purchasing decisions,” Rico explains.

This campaign is laid out within the certifying organism’s 2020 Promotion and Communication Plan, which also has other types of actions, such as the start up of the online ecological market on the CAECV’s website, holding of web seminars centred on marketing, supportive actions or the publishing of promotional material, amongst others.