“It is a time of non-stop work” 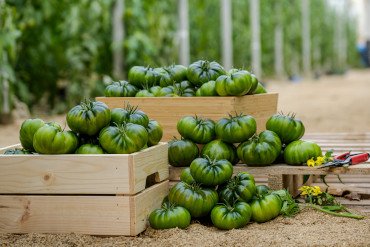 Syngenta is supplying solutions to the chain in the middle of the tomato crisis. Amongst its new developments are HR to TYLCV and materials with resistance to ToBRFV

At the meeting of the Mixed Franco-Hispano-Italian Tomato Committee it was advanced that the exports from these countries are clearly dropping every year, with a forecast of 40% less up to 2030 and up to 80% in Spain. In this context, Rafael Salinas, Head of Tomatoes at Syngenta in Spain and Portugal, predicts that the future involves using alternatives such as automation, a reality that has already started to be seen in lettuces and peppers, while it is still in its infancy for tomatoes (at present there is only one prototype in Holland). Today, most of Syngenta’s efforts are concentrated on developments that allow a reduction in labour and that bring added value, giving clients the chance to differentiate their crops (flavours, colours, formats…) and to offer something different to consumers. “We are continuing with our strategy of ‘A country of tomatoes 2.0’, obtaining results: aerated plants and for on vine harvesting; with more resistances to cover the zero residue and eco requirements; greater production; for earlier dates (on trend at present), and that concentrate significant production at the beginning of their cycle, that is to say, very explosive and fast, responding to the reduction in the marketing window… It is a time of non-stop work and for an important commitment to supply a part of the solution, which is complicated and involves many different factors.”

One of the most determining factors lies in resistances, which allow the harvests to be guaranteed, bringing peace of mind to the producers. “We are working on HR to TYLCV for early plantations,” Salinas advances. And the fact is that although over the 4 last campaigns the incidence has been low, in previous years there have been complicated situations in some production regions that could be repeated. “At times, just one single fly can infect a large amount of plants.” Accordingly, the seed company is preparing field trials for the next campaign with a red plum cherry tomato with HR to RYLCV for early plantations. It is also developing a large-sized vine tomato with this resistance and its commercial catalogue already offers Numantino, which is attracting more and more attention from producers.

Parallel to this, they are working globally on solutions to face up to the ToBRFV, one of the company’s top priorities. And they have commercial launches in some countries, which they are trying out here. “There are materials that could be grown in Spain; we will soon have an interesting amount of varieties.”

Furthermore, the pandemic has put the spotlight on the need to put healthy produce, which is beneficial for the organism, on the table. At Syngenta, they continue to promote Yoom, their purple tomato with a high anthocyanin content (significant antioxidant power) and a strong Umami flavour.

Also in the flavour line, they continue launching marmande varieties, one of the typologies that has become most popular in recent years, such as the very high-quality tomato Galadriel (MR16229). “Planting in June-July allows high-quality, grooved, heart-shaped tomatoes to be available from the beginning of October.” And the new Bukovina (MR16228), slightly more flattened in appearance, for later plantations. These two complement Dumas, which is very versatile, with extra flavour to bring a close to the dates (although it can be planted all year long, it is focused more on spring planting).

Another variety worth mentioning from its catalogue is Ibai, a plum tomato of 120-150 gm, with excellent colour, very good consistency, flavour and high production, which has resistance to TYLCV. This responds to the national market trend that is moving towards a plump plum tomato that can be used for everything, “a joker.”

PrevThe victory of De Ruiter’s rootstock
ABC Logistic, unstoppableNext
YOU COULD ALSO BE INTERESTED IN