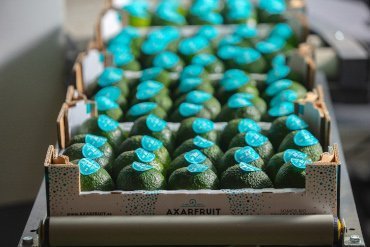 We talked to Axarfruit, which predicts a growth in volume of 20% and has invested in new installations in Vélez-Málaga

Doing things properly and being constant is the only way to become successful. Axarfruit has made this motto its own and it is now reaping the fruits of a story that goes back 30 years, when the family’s grandfather began cultivating the land. In 2013, the marketing and producing company was established and in recent years their growth has reached double figures. This year alone they expect to increase their business turnover by 20%, reaching 15 million kilos of conventional and ecological avocados, mangos and lemons.

The brothers Álvaro and Vicente Martínez (manager and sales manager, respectively), the third generation of farmers, are proud to continue with a legacy that fills them with satisfaction, and they are working to extend the business. The next steps that they will take are the start up of 10,000 m2 of new installations in Vélez-Málaga, which will give them greater logistical flexibility; and later on, the development of a ready-prepared and ready-cooked food line, for which they are already working on the design.

Regarding the mango campaign, the manager emphasises the greater commitment to the Keitt variety. “It is becoming more important because it is more regular in production terms. The differences between the on and off years is not as pronounced as in Osteen and it also has larger calibres.” However, Osteen continues to ‘reign’ and it completes the range with Palmer.

With regard to quality, the mango has “very good colouring and sizes that are more commercial than in other years and they also expect the avocados to have a very good quality due to the gentle temperatures this summer.”

The company has 100 h of its own ecological production and it has trusted suppliers in Peru, Mexico, Chile and Colombia. Colombia is becoming a “very important player in avocado production. They are investing and backing the crop and there are already Peruvian and Chilean companies operating there.”