Large and ‘mini’ solutions for all regions 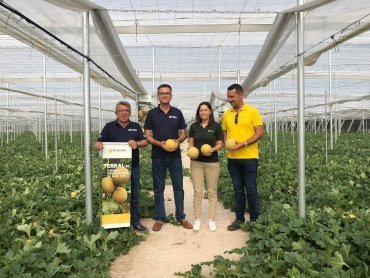 The seed company HM.CLAUSE is bringing value to the melon campaign with its new Piel de Sapo and Galia materials

HM.CLAUSE is facing up to the new melon campaign by promoting the new incorporations to the range that it presented at its Melon & Watermelon Event in July. Amongst these materials the new mini Piel de Sapo HMC 46 4851 for Murcia and Castilla-La Mancha stands out. It is a variety that brings together the flavour and the characteristic aroma of this traditional melon, with a smooth texture and a small size, idea for export. On the outside, the only difference with its ‘big brothers’ is the size, with highly uniform fruit.

For Almeria, the seed company has a new line of Galias with high resistance to powdery mildew and aphids (VAT gene) in full swing. The first variety, CLX MLQ01 F1, will be launched in a pre-commercial phase in the near future, and its internal and external quality is on a par with Mistral F1 and Terral F1, with the advantage for farmers of greater resistances. A bonus that makes it suitable for ecological crops.

Also for Almeria, Brisa F1 continues to rise, the leader in the segment due to its long shelf life quality, high production and easy handling. And in Piel de Sapo the company’s “incombustible” Valverde F1 should not be forgotten, which has reached its 15th anniversary as a reference amongst the brands, due to its quality, uniformity, flavour and texture.

For open air crops, in addition to the abovementioned mini HMC 46 4851, HM.CLAUSE has two Piel de Sapos for Murcia and La Mancha.

The first one, Valkiria F1, was presented last summer and it has quickly become popular for early productions in Murcia, due to its good quality and high yield results. With a size of 3-3.5 kg, it may be marketed by supermarket chains and brands. Agronomically, the variety is highly resistant, as it includes resistance to powdery mildew and Vat gene for aphids.

For the fields in La Mancha, Valeriano F1 stands out due to its plasticity, as it adapts to all types of soil, maintaining its yield in different areas. The hardiness of the plant contributes to this, with a good root system and a high level of resistances, mainly IR to powdery mildew and aphids. The fruit, weighing between 3.5 and 3.8 kgs, are uniform, with attractive lengthwise grooves and they maintain the aroma and flavour of the most traditional melons.

PrevNew tomatoes with top flavour
Seminis’ latest products: Flavour and resistancesNext
YOU COULD ALSO BE INTERESTED IN