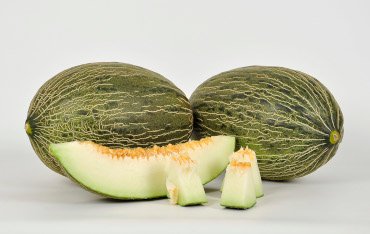 Bayer is launching several melon materials for growing under glass and in the open air, such as the Galia SVMG7464, the first variety with resistance to pox

Bayer is back with renewed strength and it is presenting several new developments. For growing under glass, they are launching a new Galia, SVMG 7420, that will be called Albizu and it is the first variety from Almeria that is framed in the Cyro Line, as well as the brand ‘Almería es Sabor’. Designed for transplanting from the 20th of February onwards, its early maturity, high Brix level (14 to 16 degrees), its intense yellow colour with dense grooves on the outside and its flavour potential in spite of being a long life plant stand out, according to Héctor Ramos, Melon and Watermelon Sales Manager at Seminis.

The variety complements SV5133, the number 1 in its segment in Murcia. And it also is tolerant to CYSDV (this is the first material on the market that incorporates this characteristic), in addition to powdery mildew, aphids and fusarium.

There is also a new development for greenhouse crops in Cantaloupe: SugarKech. After its launch in Morocco, this year it has reached the markets in Almeria, for early transplanting from the 10th of February onwards, after Sugarlup (15th of January to the 10th of February). The good quality of the fruit is common to both varieties, along with their great Brix capacity and a good post-harvest, complementing each other with regard to their scheduling.

The latest new development in protected crops is SVMA6732, a Yellow melon in pre-commercial phase recommended for the beginning of March onwards, after Chester (20th of February-1st of March). SVMA6732 is characterised by its high production, excellent exterior colour and the same intensity of flavour as Chester.

In watermelons, they continue to promote Fenway, a material for transplanting at the end of January in Almeria that continues until the start of the cycle in La Mancha, where it is present in all the markets and supermarkets due to its internal quality and flavour. For the producers, one of its main advantages is its ease of handling.

For Murcia, Seminis also has some interesting launches. In Galia there is the already mentioned SVMG7420, which adapts to cultivation both under glass in Almeria and for early plantations in the Region and that stands out due to its excellent flavour, reminiscent of a traditional Galia although, at the same time, it provides all the advantages of a long life material (production, resistances and post-harvest).

Additionally, we will have the variety SVMG7464 as the company’s second launch, recommended for late sowing in Murcia and plantations in La Mancha, completing the current Cyro Line range, providing greater flavour and a broader package of resistances in the late segment. “SVMG7464 is a long-life material, with flavour and resistances, which, in addition to powdery mildew and aphids, is also resistant to CYSDV.

In its Piel de Sapo range catalogued as “The New Seminis Piel”, they continue to promote Portús for Murcia, Roncero for productions in La Mancha and for counterseason (mainly Senegal and Brazil) and the mini SVMP3228 which, is on the rise, year after year thanks to its flavour, productivity and package of resistances, as José Guirado, Melon Development Manager, comments.

The company continues to focus on promoting varieties that stand out for their important internal quality and that are already established on the market such as the yellow melon Chester, the cantaloupe Sugarlup and the Charentais Funchal. At the same time, they are also concentrating their efforts on flavourful varieties such as Sugarlup and Chester that “are on the rise year after year thanks to their good internal quality.”

PrevLarge and ‘mini’ solutions for all regions
ToBRFV: What is the sector’s opinion?Next
YOU COULD ALSO BE INTERESTED IN