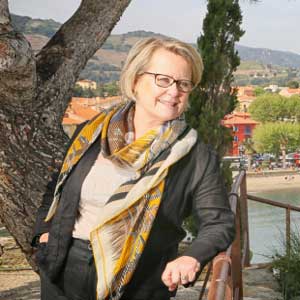 In all likelihood, I would not have interviewed Laurence Maillard if a young, 18-year-old girl (Laurence herself) had not fallen in love at first sight with Arsène, an engineer 30 years her senior, whom she met at work and with whom she has shared her life ever since.

Laurence was born 57 years ago in a little town in South-west France. Her family moved to Morocco, near the Algerian border, when she was still a baby and she lived there until she reached the age of 17. She returned to France to study Business Management and met Arsène in a company in the sector. Since then, they have been inseparable, both personally and professionally.

She is one of those people who generate confidence just by talking to you but also exudes leadership. Laurence does everything with passion and intensity, she makes the most of whatever she is doing. A tireless worker, she admits that it has not always been easy to balance out her family and professional lives.

Our interview takes place in Colliure, a French coastal town famous for being the birthplace of the fauvist artistic movement, and where Matisse and Derain used to spend long periods of time. I had an appointment to meet her at her office, a building set on the fertile plain that spreads out at the feet of Mount Canigou.

I was first received not by an office worker, but rather by Donuts, a fabulous Golden Retriever, who came to meet me along the long corridor from Laurence Maillard’s office. Donuts is followed by a grey Schnauzer called Darky. I cannot resist stroking them.

I didn’t know you had canine employees on the payroll?

They are my family’s weakness: we love animals. They arrived just a day apart. We went to the north to buy the Golden Retriever and the next day we had to go back because Arsène wanted the Schnauzer.

It seems that love has marked your biography, because it can’t have been easy to explain to your parents that you had fallen in love with a man 30 years older than you.

It wasn’t and, in fact, when I left with Arsène, they found it very difficult to accept him. I have never regretted what I did. We have overcome the difficulties in our lives together and obviously our relations with the family have been excellent for a long time now.

How is your husband at the moment?

The truth is he is fine. Having overcome an illness, he is full of projects and continues to work at my side. He is an admirable man.

What would you done if your life had been different?

Well, I really wanted to be a doctor because I am fascinated by everything related to human beings.

You lived almost 17 years in Africa. What do you remember from that time?

My father was a French language teacher. We lived in a very privileged environment, which had nothing to do with the colonial conflict. It was an idyllic world, much more in touch with culture than with the struggles that were being generated in the country. When I came to Europe, I discovered that France had been suffering from a phase of riots and demands for freedoms, with the disturbances of the May of ’68, whilst Moroccan society was more closed.

I will be honest, when you told me that we would go to Colliure and you talked about the fauvist movement, I was very surprised because art is so distant from the world in which we both operate.

I have always been interested in art and I liked the French impressionists a great deal until, living so near the coast, I discovered fauvism: the strength of its pure colours, its simplifications and the way it accentuates shapes. I became fascinated and I understand that it is the light of Colliure that causes such amazing feelings.

The only thing I knew about Colliure is that it is where Antonio Machado, a Spanish author, died in exile.

Well, I didn’t know that detail, although there were many Spanish exiles from the civil war in this area.

Creating a company from nothing means great sacrifice. You have repeated several times your feeling of not having devoted yourself to your children enough.

Yes, this is something that has worried both Arsène and myself. We started from scratch, although my husband had a great deal of knowledge and experience. We have reached the place we are today in just over three decades.

The whole family spent many years without any holidays and if we did take them, they never lasted more than five days. In the summer, our most important work time, we signed the children up to all kinds of classes: sailing, horse riding, etc. Thus, we could continue to work.

Now our children are older and we have been able to talk about this. In any event, they know they definitely are our best achievement.

And where are they now?

My daughter works for Hermès and is in China at the moment, opening up one of this luxury company’s business lines. My son is studying Business Administration in Paris and is about to attend an apprenticeship programme in South Africa.

That is the reason you are wearing a beautiful Hermès scarf?

Yes, I love it. It was a gift from my daughter that I treasure.

How do you get on with the new technologies?

I think they are amazing. I use them all I can and I am very interested in knowing about their impact on the business world.

And what was the last thing you have read?

I am a great fan of reading short items. I enjoy newspapers, but particularly business management and personal development subjects, because I believe in human values and human possibilities. Now I am reading “The Art of War” by Sun Tzu, a book a Spanish friend recommended to me. It is amazing because it talks about military strategy from over 2300 years ago, but the principles could be adapted as business strategy.

How do you relax when you are not working?

My personal yoga session consists of taking my lawnmower and pushing it around my garden. It gives me a new lease of life because the smell of freshly cut grass allow me to escape from my daily worries for a while.