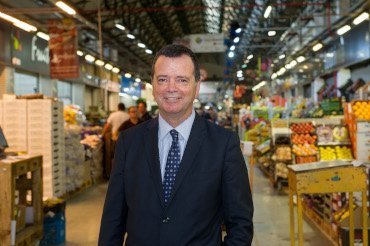 Once again this year, Mercabarna presented record trade and financial figures in 2018. What is the secret of its success?

There are several factors that explain the constant growth of Mercabarna’s fruit and vegetable sector, but, in my opinion, there are two that stand out: the good management carried out by the company Mercabarna SA and the dynamism and innovative spirit of the companies in the Food Unit, which are continuously adapting to the consumers’ new demands and needs.

The permanent cooperation between the business associations and Mercabarna has allowed launching new projects, opening up new markets and taking decisions to consolidate Mercabarna as a leader in Europe, an international reference, competitive, innovative and underpinned by social and environmental values.

How is this year’s marketing of fruit and vegetables going, compared to last year?

When will the first ecological wholesale market in Spain open?

The work should be finished on time, in the first quarter of 2020, therefore the Biomarket should be up and running before the summer.

But there already were many companies in Mercabarna marketing ecological foodstuffs…, why is a bio market needed?

Yes, currently at Mercabarna there are around 40 companies that market ecological foods in a consolidated way. Most of them sell fruit and vegetables, but there are also some that market meat and dried products.

One of the Biomarket’s main targets is to bring fresh ecological foods to the places where citizens normally shop: retailers and the catering trade (HORECA). Grouping these products together in a single market makes them more visible to buyers and we also are promoting competition between the companies that will form part of the market, encouraging the variety of products and the best quality-price relationship for citizens.

Furthermore, we will have some specific installations for ecological foods and, when grouping the offer of these products together under a single roof, the controls regarding hygiene-sanitary, certification labelling and traceability will become easier.

We’ve seen there are some new awards regarding food waste. What do these consist of?

The ‘Premios Mercabarna Paco Muñoz’ intend to promote and recognise initiatives against food waste in the food production and distribution chain on a yearly basis. These awards are endowed with 5,000 € for each of these 4 categories: producer, wholesaler, retailer or networking (initiatives promoted between two or more agents on the food chain and social bodies). The presentation period for projects ends on the 15th of October and the prizes will be awarded at the end of the year.

Mercabarna, along with the wholesale trade association, were pioneers in Spain, starting up the international ‘5 a day’ campaign, and this year it celebrates its 20th anniversary. Are you going to celebrate it?

Indeed, the 2019-2020 school year is the 20th anniversary of the campaign that we started with the wholesale trade association (AGEM) to promote fruit and vegetable consumption amongst school children. Every year, 6,000 children take part in this educational programme. Over these 20 years, 120,000 pupils from 400 schools in Catalonia have taken part.

To celebrate it, we are organising different actions that start in October and that will end with a great party in May, where we expect over 4,000 school children to take part.

Mercabarna always has initiatives to promote innovation in the sector. Is there anything in the pipeline at the moment?

Regarding the new technologies, Mercabarna is engaged in an important digital transformation process. It is a transversal project that seeks to optimise the internal and external operations of the company, as well as the infrastructures of the Food Unit as a whole; therefore it is being developed in the medium and long term.

Furthermore, we have initiated a start-up accelerator, which we have called Food&Tech. This October, the start-ups that are taking part in the programme have been presented. This programme is aimed at promoting the incorporation of new, innovative and technological processes and products in the food sector.

Tell us about the other projects that Mercabarna is working on.

We are continuing with the Mercabarna Grants that we started in 2014. These are aid that we give to companies on our premises to boost the hiring of young university leavers and professionals trained by the Training Service, who are unemployed. This programme is aimed at promoting employment, encouraging business activity and helping to improve the competitiveness of the companies in the Food Unit. Since it started, we have granted 84 Grants and 75% of the people given a job continue working in the companies after the Grant period has concluded.