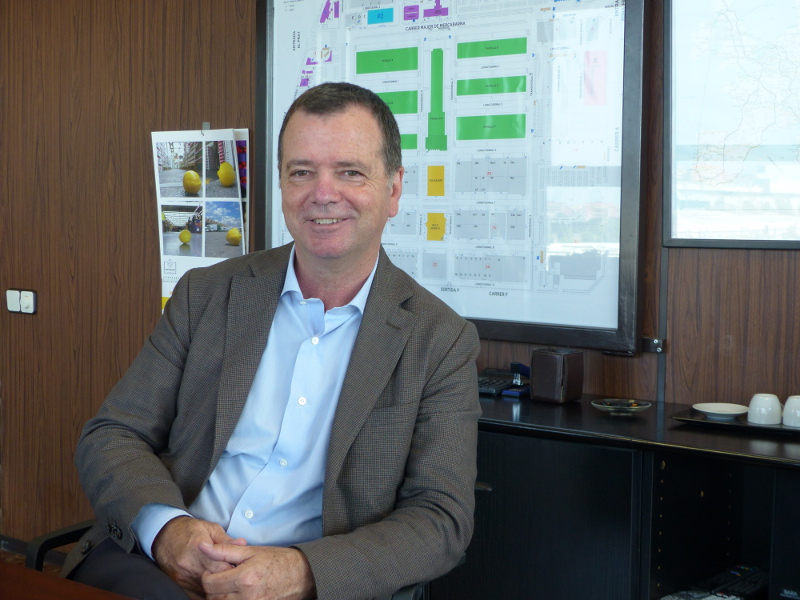 In a clear commitment to keep being the leader, but also competitive, Mercabarna reinvented itself on its 50th anniversary

And it is doing so looking towards a future that involves becoming more sustainable and where social concern is now one of the cornerstones of its many different activities.

In the words of its general manager, Josep Tejedo, “at Mercabarna we like to take on challenges that help us to build a more efficient, more solidary food city that is closer to people.”

Mercabarna is a reference market in Europe that has known how to adapt to the different situations and to a society that is transforming at breakneck speed.

Its business turnover in 2016 was 28,459,287 euros, which represents a 1.5% increase compared to 2015. With a positive trend in its profit and loss account and a profit before tax of 6.283.757 euros, from its general management they remark that “a healthy, continuous operating account has to devote a large part of its resources to social activities.”

The fight against food waste has become an essential point aimed at obtaining a more sustainable and responsible supply chain. There is the Strategic Plan for Food Exploitation, which is supported by the companies on the premises. In 2016, the companies donated 1,300,000 kilos of produce to the Food Bank.

The Mercabarna Grants programme, now in its third edition, has made it possible for 34 unemployed people and recent university graduates to find work. In addition, in 2016, its Training Services trained 282 unemployed people in food professions with an employability rate of over 50%.

For the second year running, Mercabarna has organised the summer campus ‘Refréscate con 5 al día’ (Refresh yourself with 5 a day), aimed at children from families with limited economic resources. And once again, for the 18th year running, it has organised, along with AGEM, the ‘5 al día’ (5 a day) campaign, in which 6,000 school children take part every year, with healthy eating habits being promoted amongst them.

Renewal of the infrastructures

Mercabarna’s entire food unit is immersed in an infrastructural refurbishment process that will end in 2020. This refurbishment is carried out when the markets are not operating, with the intention of causing as little disruption as possible to the daytime operations.

For the time being, in the Central Fruit and Vegetable Market, the area designated for local producers and agricultural cooperatives has been refitted. The services in four of the seven halls have been refurbished and the change of the roofing and structural renovation of halls E and F has been finished, designed with the idea of housing solar panels in the future. Likewise, the fire prevention systems, the water pipes and the low voltage electricity installations have been modified. The façade of the management centre and the commercial area has also been refurbished, using highly advanced energy efficiency criteria.

At the end of 2016, some new office space came into operation, the FoodTrade Center, consisting of units leased for short periods of time to be used by foreign buyers, as well as for meeting rooms, etc.

Another of the key points will consist of checking all the processes of the services that Mercabarna provides for its users, as well as its infrastructures. Greater efficiency and efficacy will be obtained with this, not just for Mercabarna, but also for all the users of its premises. According to Tejedo, Mercabarna is a market that is permanently transforming, with efficiency being its goal. “Our aim is to provide businessmen located in this market with the best means and installations possible, so that they can perform their activity better here than in any other venue.”

A source of initiatives and projects

In the autumn, the first stone will be laid of the ecological produce hall, which will be finished in autumn of 2018. This is a commitment that is being joined by more and more companies, given the increase in consumption in Europe over recent years and although in Spain it is climbing slowly, there already is a market segment that is very conscious about its consumption.

Another two successful projects are the Mercabarna Innova prizes, as recognition to the companies that integrate innovation as part of their strategy and the Observatory of Trends, from which the new trends in the sector of consumption and food commerce are studied to identify new business opportunities.

Initiatives such as the ‘Carrera Mercabarna’ (Mercabarna Fun-Run), to be held on the 8th of October, which has reached its third edition this year, or the awards and photograph exhibition, ‘Mercabarna Enfoca’ (Mercabarna Focuses), all contribute to making Mercabarna known amongst citizens.

PrevLettuce and stone fruit at Fruit Attraction
4.1% increase in fruit and vegetablesNext
YOU COULD ALSO BE INTERESTED IN