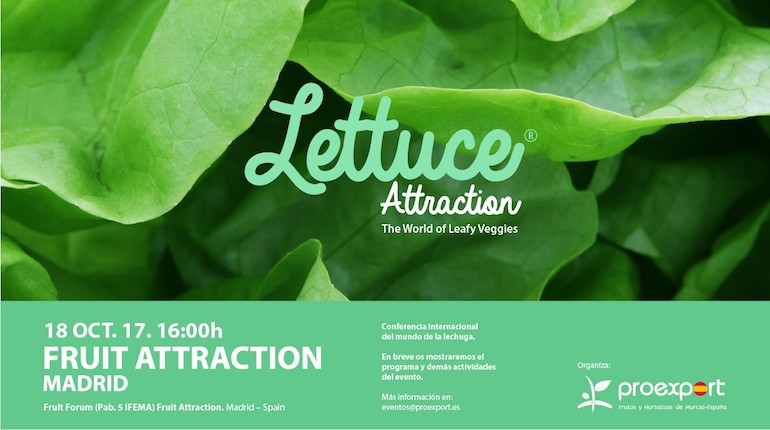 Within the framework of the 9th edition of Fruit Attraction, the conference “Lettuce Attraction” will bring together, on the 18th of October, the main companies linked to the lettuce and leafy vegetable sector. The most important producers on a worldwide scale of this vegetable are already preparing the conference “Lettuce Attraction: the world of leafy vegetables”, which will be held in hall 5 of Ifema (Fruit Forum / 4 pm), organised by Proexport (Asociación de Productores-Exportadores de Frutas y Hortalizas de la Región de Murcia) and its member companies.

The latest trends and challenges faced by a product considered to be the queen of salads will be covered at this event.

The conference will have international speakers, and it is aimed at producers, exporters, importers, retailers, researchers, seed companies, food processors, cooks, and specialised journalists. It will be used to inform about the economic, gastronomic and nutritional importance of lettuces and other leafy vegetables in Spain. All the information about the event will be uploaded in the near future to www.lettuceattraction.com.

Also on Wednesday, the 18th, from 10 to 12 am in the Fruit Forum 9 space, a seminar devoted to pomegranates will be held: ‘The pomegranate: new perspectives for an emerging fruit’, organised by the DOP Pomegranate Mollar de Elche.

The International Stone Fruit Conference: Stone Fruit Attraction will take place on the 19th of October, bringing together national and international professionals from research and development, producers and exporters, as well as representatives from distribution and it will be organised in three blocks. The first will be aimed at research and development; the second at the distribution, where the “Market trends” will be covered. The third part will be a debate about “Production and Consumption. Prospects for the stone fruit sector”, in which Spanish producers and exporters as well as those from the main producing countries such as Italy, Chile or South Africa will take part.

PrevThis summer, the ‘Estrellas’ will not rest
Mercabarna, committed, solidary and innovativeNext
YOU COULD ALSO BE INTERESTED IN