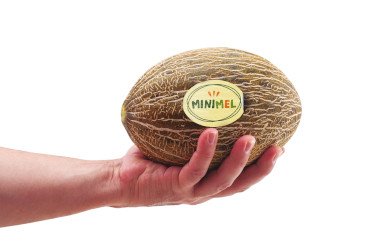 HM.CLAUSE has important marketing prospects for its first mini melon, which is being introduced in all regions this year.

At the latest edition of the Fruit Attraction Innovation Awards, Minimel was among the 10 finalists out of a total of 160 participants. This gives a hint about how well the variety from HM.CLAUSE is doing, but this is not the only factor. Last year, its first year on the market, those who tried it were very satisfied and for the coming campaign the company has “very positive feelings, an important growth is expected due to the response from both sales people and supermarkets,” according to Venancio Manzaneque, Sales and Development Delegate for La Mancha and North-eastern Spain.

Minimel is a “true piel de sapo”, with the same organoleptic characteristics and flavour of the conventional varieties from HM.CLAUSE, but in a single-person format of 1.2-2.200kg. Its crunchy flesh guarantees a very good post-harvest and an extended shelf life, ideal for export. Externally, it has a very pretty lengthwise grooving and “it is striped from start to finish.”

Manzaneque underscores that the variety offers a “complete health pack” with resistance to powdery mildew and aphids and “it works very well in exhausted soils and shows no sudden death problems,” responding to an increasingly widespread problem in the crops in Castilla-La Mancha.

This year, the ‘mini’ has also caught the attention of other regions: there are producers interested in Almeria (transplanting from March) and Murcia (end of April to the beginning of May). For La Mancha, the recommended transplanting dates are from the 5th of May to the 15th of June.

HM.CLAUSE has an extensive portfolio of melons that this year is being extended with two new developments for greenhouse growing in Almeria. The first one is Calima F1, which is added to Brisa, Mistral and Terral, the flagships in Galia melons from the seed company. It upholds the standards of flavour, quality, yield and it provides an added bonus: resistance to powdery mildew (with the incorporation of the VAT gene). It is recommended for plantations from mid-February to mid-March. Its fruits, very homogeneous in size and shape, are the perfect size for export and a golden yellow colour that is above the market average, José Miguel Reyes, Marketing Manager indicates.

The other new development is the piel de sapo Valdemar F1, for plantations from the 15th of January to the 15th of March. In short, it is “a Valverde F1 that incorporates resistance to powdery mildew.” The variety continues with the high quality standard started off by Valverde 17 years ago now, ranking as the leader in its segment.