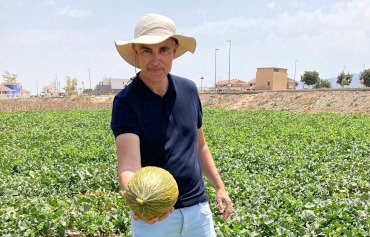 Syngenta is launching Graciano, its first variety with semi-firm flesh for the province.

A few years ago, Syngenta started to bring the first melon varieties from its new genetic line onto the market, with firmer-fleshed fruits and greater post-harvest, without giving up the traditional flavour. This range has reached Almeria with Graciano, for transplanting from mid-January to mid-March. The variety has the earliness needed to start the cycle off; it shows good behaviour regarding splitting (necessary due to the humidity conditions in the greenhouses), the post-harvest demanded by the chain… “It is not easy to make the grade in this cycle in Almeria, but last year several producers managed it and the behaviour was very good,” according to Víctor García, head of melons and watermelons.

This ‘all rounder’ is also focused on Murcia for open-air plantations (transplanting from mid-March until the 10th of April) and Castilla-La Mancha (April) using thermal blanket. Along with Cencibel, which completes the open air range, it is one of the company’s main new developments this campaign. “We are using these to extend the concept of long-term flavour in melons that we started with Airen and Macabeo.”

Both Graciano and Cencibel have an extensive package of resistances, including powdery mildew and aphids and they are characterised by the good splitting behaviour of the fruit. Additionally, they have dual aptitude for whole pieces and those cut in the stores or in processing clean rooms, a demand that has already been consolidated due to the convenience and the bonus of reliability that it means for consumers and to the versatility that it offers the distribution, as it allows two pieces to be put on the shelves when large fruits are plentiful.

Regarding Graciano, the following stands out: “its finish and quality grooving and ease of handling.” And for Cencibel: its “significant hardiness and endurance until the end of the cycle with guarantees (good sugar levels).” In this case, the variety is aimed more at open air plantations: for Murcia (transplants after Graciano, from mid-April to the beginning of May) and La Mancha (mid-May to the end of June.)

Cencibel was “highly necessary” and means an evolution in the piel de sapo programme, with very high sales yields, an essential point in the segment.

Under the Zeraim brand, there are two important new developments this year. The first one is Ibiza, a yellow melon that is totally aimed at export in open air crops: transplants in Murcia from mid-April to the beginning of May and June in La Mancha. It stands out due to the healthiness of its plant and its good adaptation to ecological growing, owing to its resistance to powdery mildew and aphids and it offers significant uniformity in size (1.5kg), with good flavour, crunchy pulp, good post-harvest… continuing in the same line as Party and Maillot.

The other new development is Jamaica, a black, seedless watermelon with which Zeraim is completing the range and that is finding its niche in all regions due to its important versatility. “The watermelon market is highly demanding regarding fruit quality and this material stands out precisely for this reason.” The skin, dark green without any stripes, contrasts with the deep red of the flesh, but its differential aspect lies in the flavour, as occurs with all the company’s materials. Another of the advantages of Jamaica is its high production, with sizes of 5-7 kg. For all these reasons, Victor Garcia advances that this year “we are going to have it growing with many demanding, specialist producers, in several different regions.”