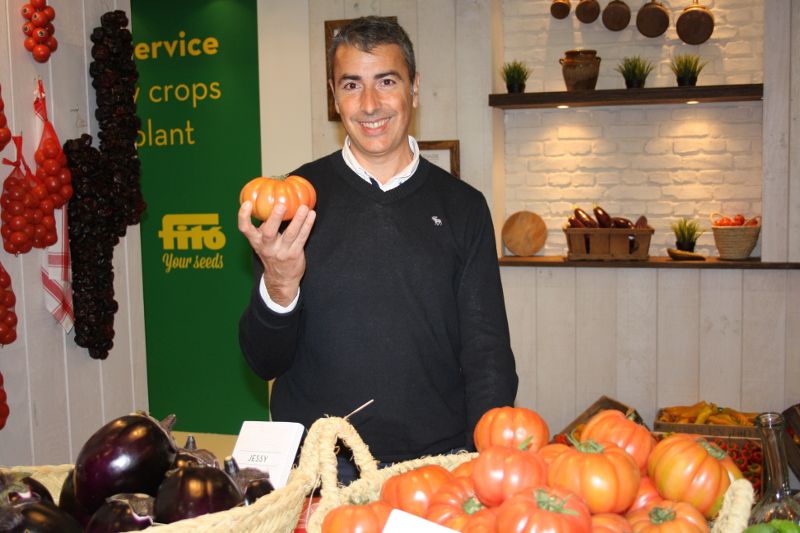 For the second year running, the company Fitó is highlighting one of its best-loved vegetables on the market: its Monterosa tomato.
Monterosa is a unique variety, with its outer appearance and its aroma and flavour reminding us of the tomatoes grown by our grandparents, within the parmentine and ox heart lines.
This new produce was conceived as the result of a project where the seed company was looking for a commitment to recovering the traditional flavour of the tomato, and which sparked its collaboration with the Gavá Group.
“With Monterosa we wanted to recover the characteristics that have been lost in some intensive crops where high production and homogeneity in appearance are valued more than the sensorial values of the produce”, Jordi Ballester, Corporate and Business Development Manager at Fitó explained.
Visually the new tomato corresponds to a large sized product, exuberant and voluptuous, with asymmetric shapes and ribbed, with velvety skin and large, colourful sepals. Its colour well deserves the name that has been given to it, since it evolves according to its ripeness from Apple green to deep pink. Amongst its sensorial attributes, a balanced flavour with a touch of fruit and sweetness stand out.
Monterosa, which is positioned on the upper market levels, is a perfect salad tomato, although when very ripe it can be extraordinary cooked in sauce.
Agreement with the Gavá Group. Fitó has reached an exclusivity agreement with the Gavá Group up to the year 2024 for its production and marketing in Almeria and Granada. “With these productions, the idea is to be on the market almost seven months with an uninterrupted vocation throughout the year,” explains Fransesc Llonch, sales director from Gavá.
This second year of production, the wholesale company from Mercabarna will reach a volume of 3,000,000 kilos.
According to Llonch, “the commercial success of this tomato is based on the fact that it has the characteristics of a summer tomato, local, but produced in the winter season.”
“Although the winter market has a large amount of tomatoes, there is a lack of quality tomatoes. This space has now been taken up by the Monterosa brand and variety”, Llonch adds.
The produce is being positioned with some very good results in fruit and vegetable chain stores and in regional supermarkets, “although given its high quality, we are sure that we will reach a greater distribution in broader-spectrum supermarkets.”
The most relevant areas for the crop are established in the region of Maresme (Barcelona) during the summer and in the provinces of Almeria and Murcia in the winter.
Aimed at gaining greater penetration on the market and improving the channelling of its demand, Fitó has a web site where the produce can be acquired on line, and for gardening enthusiasts, even seeds can be purchased. The web also has preparations and exquisite recipes using this vegetable.

The Sahara, Crimea, Airbus-Boeing… The list goes on and on

FEDEMCO is celebrating its anniversary

“It is a time of non-stop work”

Romancero is gaining in popularity