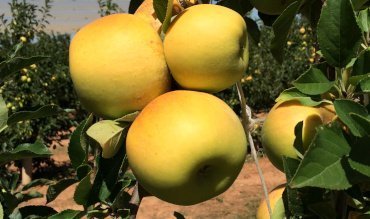 After its good connection with consumers, Opal’s® remaining challenge is for its differentiation at the point of sale compared to the Golden Delicious variety

In order to do this, Opal® has started the current season with an attractive promotion campaign that it will present at Fruit Attraction. Here, its Spanish license-holders (Nufri and Orchard Fruits) along with Michael Weber, the brand’s owner, will explain to clients and to the specialised press this apple’s outstanding attributes and differences.

The communication campaign uses two hashtags: #whyso and #staytrue, the first one to explain why this apple should be eaten and the second refers to the intrinsic, real goodness of this fruit, which make consumers buy it again.

“The idea of the campaign arose because often consumers perceived Opal® as a very ripe and even ugly, Golden Delicious apple. Therefore, we want to show that its appearance has nothing to do with its pleasant flavour and crunchy texture,” Weber explains.

This series of actions will also allow one of the basic principles of its production to be explained: the sustainability of the crop. “It was by chance, as the creator of Opal®, Dr. Tupý, a professor in Prague at the time of the Iron Curtain, had no resources for his plant breeding activities and, for the same reason, the farmers also did not have fertilisers or chemical products. After many trials, he managed, naturally, to make Opal® (the result of Topaz, an organic apple and Golden Delicious) resistant to apple scab and therefore, an apple that did not any plant protection.

Therefore, what had been a problem became a highly competitive advantage in a world where consumers are demanding natural products more and more.

In Weber’s words, “the differentiating attributes of this apple are allowing us to find our place in a Premium segment. It is not an easy task, but we have very experienced licensed partners, and consumers who know about the apple have become loyal to it.”

These values are based on a unique flavour where the sugar and acidity ration is perfectly combined, a warm golden colour that encloses a crunchy flesh, a brown, rustic and very natural stalk, as well as a strong skin that is resistant to damage caused by friction.

Another of its more unique characteristics is that once it has been cut it does not take on the brown colour of oxidation and this makes it the perfect fruit for pre-prepared food and juices.

Twelve months of the year

Its supply, which began tentatively on British supermarket shelves, is now guaranteed throughout the year with plantations in Southern Hemisphere countries. The first commercial trials have been carried out in Australia, Chile, New Zealand and South Africa.

Opal® is also found in the main European production areas, such as Piedmont and Trentino in Italy, Catalonia and Aragon in Spain, Limousin in France, areas around Lake Constance in Germany, Styria in Austria, in Holland and in the United Kingdom.