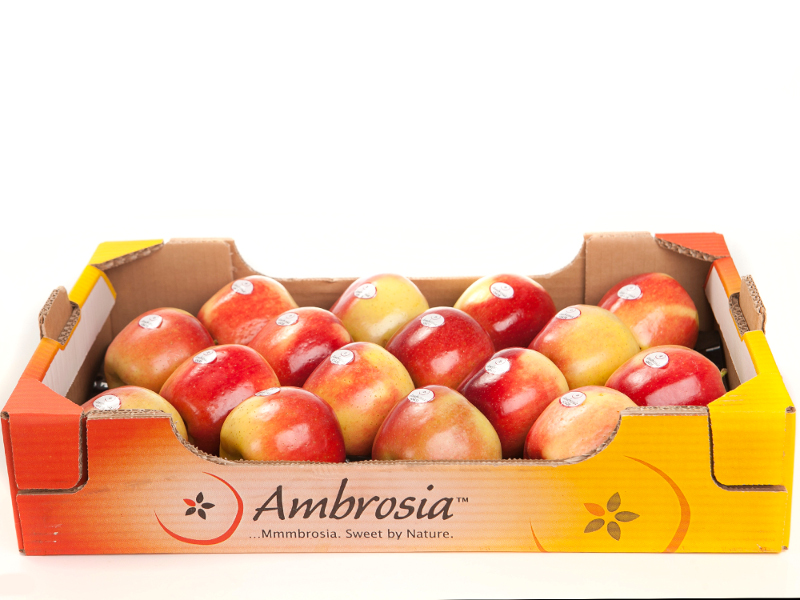 With the Ambrosia apple season about to start, the companies Rivoira and VI.P are optimistic

Partners since 2013 in the exclusive cultivation of Ambrosia™ apples in Europe, Rivoira and VI.P-Manzanas Val Venosta, have a positive outlook regarding the start of the 2017-18 campaign, in spite of the 20% reduction in the total production compared to the previous year.

“A very hot summer and a shortage of rainfall have affected the average size which, as with other varieties, is appreciably smaller,” Marco Rivoira, Executive Manager of the homonymous group indicates, “but we believe that the situation will not affect the market thanks to the intrinsic quality of the produce and to the general shortage of European apples.” “Additionally, last year we had good results with the launch of Baby Ambrosia™ in 1 kg bags for the home market and the 18 kg bushel for export, therefore we are not concerned about having an increasing product share of this size.”

Fabio Zanesco, Sales Manager at VI.P, adds that “our production is increasing thanks to the new plantations, but today we have still not reached our potential production due to the frosts in April/May. However, the lower impact of the summer heat on our high mountain crop zones and sufficient rainfall has meant that we have obtained some good calibres.”

“Regarding the marketing strategy, we are coordinated with VI.P. Jointly we have studied the international development of the current commercial channels with the brands of Ambrosia™ and Gold Rosé™ and, given that the production is lower than expected, we have been consolidating the work carried out with loyal customers in Spain,” Rivoira continues.

“Ambrosia will continue growing over the next few years,” Rivoira and Zanesco conclude “and we are certain that many other clients and distributors will progressively become consolidated and be able to extend the distribution, bringing this proposal closer to consumers.”

PrevMelinda and La Trentina join together to form a single trading subsidiary
Pink Lady has almost reached 180,000 tonnesNext
YOU COULD ALSO BE INTERESTED IN