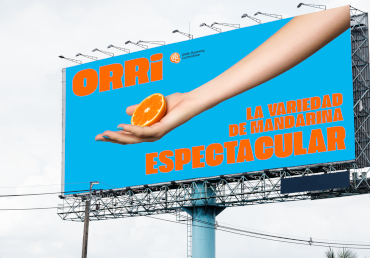 During this campaign, Orri has beaten the price record in the fields for a mandarin in the history of the Valencian ‘Lonja de Citricos’ Citrus Fruit Market. On average, its selling price in the fields is over 60% higher than rival varieties.

Year after year, the Orri mandarin holds the title of “the best priced on the market”. Since the regularisation of the unauthorised farms took place and the implementation of the management system was carried out during the 2015-2016 campaign, this variety has been reaching prices, on average, that are more than 25% above their main rivals on the market, as can be deduced from the data offered by the Lonja de Citricos. Regarding the figures for this year, in this campaign, the average sale price has reached 1.3 €/kg in the fields.

Pioneers in traditional distribution and e-commerce

ORC wanted to launch a campaign that acknowledges the great effort and knowledge of the distribution professionals in order for it to be them, the ones who best know the produce, who would pass this information on to the end consumers and to ensure that the promotion is not only visual, but rather consumers can discover the incredible qualities of the Orri mandarin firsthand.

During the month of March, the most important Orri promotional campaign since the creation of the ORC has been carried out. A multitude of promotional actions have been part of this, amongst which those performed in the main Spanish wholesale markets stand out (Madrid, Barcelona, Bilbao and Zaragoza) where, through over 83 stands, all of them specialists in the marketing of premium mandarins, the promotion campaign has been spread to over 8,000 specialised greengrocer stores. To implement this, they have used an extensive team of promoters who have been giving out promotional kits to all the retail clients who bought Orri for their greengrocer stores.

The action was completed with billboards, OPPIs and digital screens in these wholesale markets, with a scope of 30,000,000 estimated hits amongst the specialised target group of the distribution professionals and with promotional actions in Madrid’s top greengrocer stores.

In addition, ORC has reached an agreement to promote and distribute Orri mandarins through the main e-commerce companies operating in Spain: Amazon and Deliveroo. Thanks to this collaboration, Orri mandarins will reach over 4,000 Spanish households.

Regarding large retailers, ORC continues working to position the Orri variety in the best supermarkets, with the goal of reaching the largest number of consumers. Recently it reached an important agreement with two of the top five food distribution chains in our country: Carrefour and Eroski, to promote Orri mandarins in their sales centres. In this way, Orri, the premium mandarin par excellence, has been added to the most powerful companies in the distribution sector.

Spain and Portugal are the only European countries where Orri mandarins can be legally produced. This means that, in addition to being an exclusive premium variety, it is also a product that is grown following European regulations. With this variety, Spanish producers market a differentiated product in Europe compared to the protected varieties that are being produced legally in countries such as North Africa, where the production costs are much lower and where there is no effective control carried out on the unauthorised producers.

From the sustainability point of view, purchasing Orri mandarins also contributes to more responsible consumption. This variety has a very resistant peel that allows it be stored in excellent conditions, both on the trees and during the post-harvest process, in a natural way, without applying any artificial treatments. Likewise, this characteristic makes the mandarins last perfectly in households before being eaten, considerably reducing food waste.

Values such as teamwork, passion, equality and effort are closely tied to the philosophy that ORC understands to be linked to Orri mandarins. For this reason, at the association they are promoting actions that encourage these ideas and that support the groups who work with them. The sponsorship contract with one of the sports clubs with the greatest standing in Europe, Valencia Basket is included in this framework, having supported the women’s team in its participation in the Copa de la Reina (Queen’s Cup) and the Eurocup Women.

ORC has joined the incredible task of promoting sport and the striving values that Valencia Basket carries out with youngsters in its innovative ‘L’Alqueria del Basket’ basketball school to collaborate with the promotion and spreading of healthy living habits and the consumption of fruit amongst youngsters.

The Orri variety is chosen due to its supreme quality, which is virtually seed-free and with a fine, soft and very juicy texture. The good-sized fruit, with smooth peel, bright orange in colour, are easy to peel, although they have a very resistant and firm skin that provides them with optimum conservation both on the trees and in the post-harvest process.

PrevSpain is using slings to beat Goliath
Registrations are open!Next
YOU COULD ALSO BE INTERESTED IN