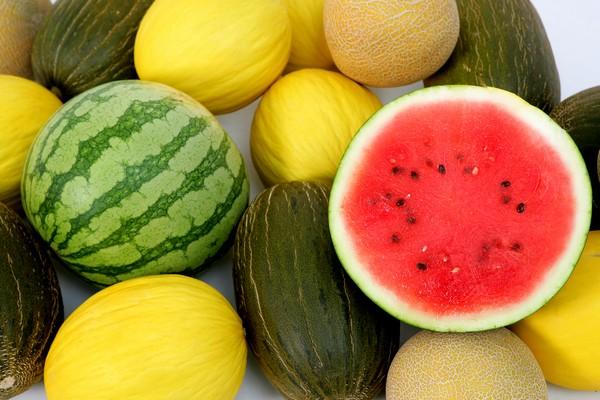 At the beginning of the campaign, COAG denounced the “free pass” for watermelons at the border. A situation that companies are facing by trying to maximise efficiency to maintain their standing

In mid-March, before the national watermelon campaign started, COAG once again pointed a finger at unfair competition from third countries. An ‘intolerable’ weight for the agricultural sector and which, year after year, gets heavier. According to the study prepared by the agricultural organisation, Spanish watermelon imports have multiplied by almost 9 between 2014 (10,572 t) and 2020 (88,603 t). Last year, Morocco again took up 81% of all the imported watermelons, followed by Senegal (10%) and Brazil (1.8%).

Andrés Góngora, Head of the fruit and vegetable sector at COAG, affirms that “importers and buying platforms from distribution chains concentrate the largest part of the imports between March and June (88% of the total) to force prices down at the start of our campaign and to maintain an artificial strain that drags the profitability of our production down.” A situation that worsened with the backdrop of the pandemic, as the producers are also obliged to face up to extra costs, added to the already increasing expenses in inputs.

Melons are also having problems, a product that has several fronts open: on the one hand, it has been succumbing to the ‘success’ of watermelons for a few years now; on the other, some types in the earlier areas are suffering from quality problems; and the most serious problem, the already mentioned competition from third parties (+30% over the past five years according to data from Estacom), to such a point that some producers affirm that Morocco in particular “will get us out of the way” in types such as Cantaloupe and Galia, with which they are adding hectares in areas such as Dakhla. Another added problem is the fact that the Moroccan productions have started earlier due to the higher temperatures. An element that directly affects the production in Almeria. Melon imports from Brazil should also not be forgotten, which, as Cooperativas Agro-Alimentarias recalls, overlap with the Spanish production, causing a serious imbalance on the market.

Fruit Today managed to contrast this information with some of the main Spanish plant breeders and producers of watermelons and melons, who see Morocco as a serious threat, difficult to beat. “We are trying to fight against unfair competition by third parties, but it is like using a sling to fight against Goliath,” Loli Rodríguez, Head of Watermelons at Unica, comments. In the same way, other companies in the sector are trying to hold onto their leadership positions by investing in all kinds of tools to maximise efficiency and yield and offer both top quality and food safety. Accordingly, it is worth mentioning the intensification of the commitment by the brands to more specialist produce, particularly for the national market. Europeans prefer European produce (countries as Germany have increased their demand by 40%, according to Coexphal), with some exceptions such as the French market, which prefers Moroccan melons and is giving them a “completely free pass through Saint Charles.” 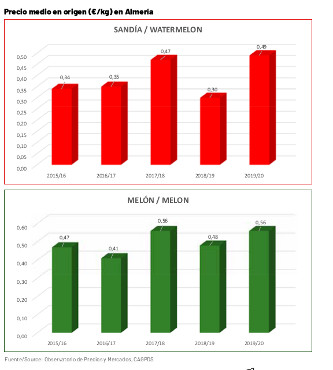 The campaign in figures

The bad weather has marked the beginning of the watermelon and melon season in the earliest region, Almeria, which started off with a slight delay compared to last year, as a result of the low temperatures in December and at the beginning of this year, although the quality has not been affected.

The Department of Agriculture, Livestock, Fishing and Sustainable Development of the Andalusian Government estimates that in the province there are 10,778 hectares of watermelon crops and around 2,965 hectares of melons, which means an increase in surface area of 1% and 4% respectively, compared to 2020. 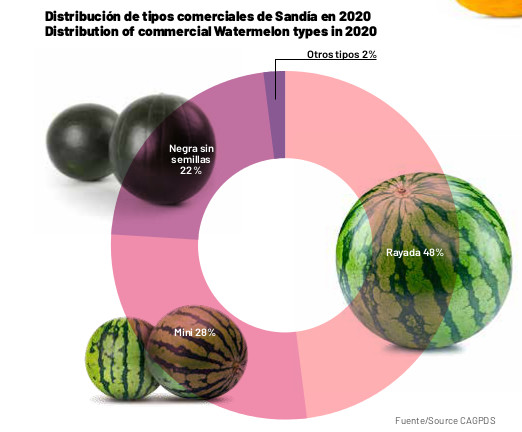 In watermelons, the type most grown is the striped white. As the campaign advances, its offer decreases, giving way to the black triploid, that this year increases 4% according to Coexphal). With a lower percentage, but clearly rising, we also find the mini /+7%) and midi watermelon type, mainly focussed on ecological and export producers. And with a niche market, there are specialities such as yellow watermelons, mainly aimed at the Germany market. In 2020, the ‘pie’ was divided up as follows: 48% of striped, 22% of black seedless, 28% of mini and 2% of other types, as can be deduced from the Observatory of Prices and Markets of the Andalusian Government. 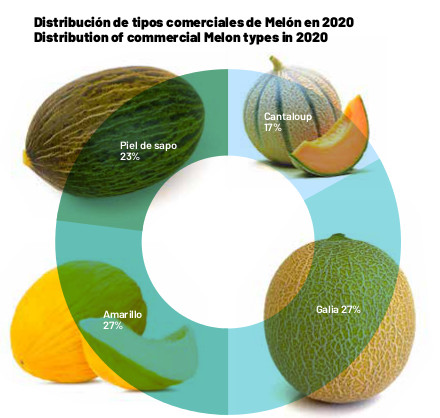 Regarding melons, the seed companies are perceiving an increase in convenience food, practical, with increasingly smaller sizes, mainly for export, but also for the home market and they coincide in estimating a reduction in surface area for Cantaloupe, Galia and Piel de Sapo melons in the open air of between 10-15% compared to the previous campaign. The crop surface area devoted to yellow melons is growing by between 5-10% both in Almeria and in Castilla-La Mancha, as a result of the good prices reached in recent campaigns, with an average of around 0.30€/kg. Comparing this with Cantaloupe melons, where prices range between 0.20-0.30€/Kg, it is obvious that it is better for farmers to grow yellow melons, due to their greater yield per hectare, easier handling and lower costs. While Galia melons, in the same price range of 0.20-0.30€/Kg, are running out of steam due to the high cost in inputs, amongst other factors, according to the seed companies.

In 2020, the Galia was the type most grown in Almeria, with 33% of the total surface area devoted to melons. In second place, yellow melons reach 27%. These are followed by Piel de Sapo, with 23% and Cantaloupe with 17%.

The greater professionalisation of the sector in the watermelon area has made the brands multiply. Currently, it can be affirmed that almost all the producers and marketers have reached a high quality standard, making Spain into one of the countries with the highest watermelon consumption per capita, more than 10 kg /person and year.

Nunhems, the horticultural seed division of BASF, has been the great trendsetter in this reality where brand-quality lies at the centre, and the other plant breeders have followed it. Pere Montón, Account Manager at the company, traces the lines that they are following regarding trends. “We are working on different goals and, without any doubt, one of them is to make watermelon into a child-friendly product. That is to say, to increase consumption amongst children (as this is relatively low), overcoming the obstacles that make it difficult to eat watermelon with formats that are more adapted, more convenient, portions to go, etc.”

Another goal they are working on is increasing breakfast time watermelon consumption, associating watermelons with a product to obtain energy, designing new possibilities in the dishes that are eaten in the morning or creating a specific complement for certain cooking proposals.

They are also not neglecting the design of the packaging, with new ways to transport them more easily and for storing watermelons in the home, even outside the fridge.

Finally, they are working on responding to the increase in the “ready to eat” format, demanded by consumers for eating outside the home and when having guests at home.

Prev155.000 tonnes of the ‘Touches of Emotion’ Bouquet
Orri: the mandarin that is beating price recordsNext
YOU COULD ALSO BE INTERESTED IN