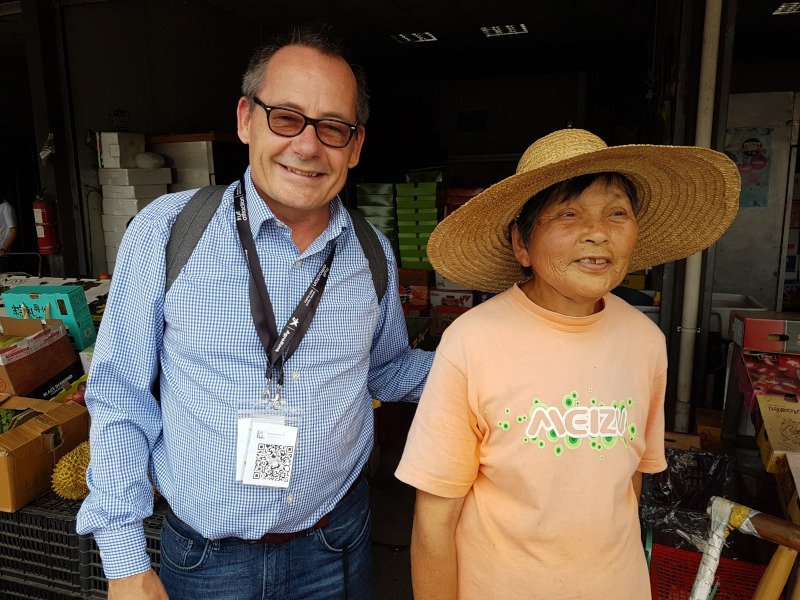 Categorical and direct, Oliver Huesmann, a member of the Expert Committee of the Xinfandi Agriculture College, explains to Fruit Today how globalisation has changed the trade flows around the world.

What is your opinion, as an international consultant, living between Europe and the country with the largest development in the world, China, about the conflict the Spanish citrus growing sector is experiencing with South African production?

I warn you that many people are not going to like my answer. I can’t see any problem with the presence of South African produce. Yesterday, they blamed South Africa and tomorrow it might be Egypt, Peru or Uruguay.

The problem is much wider-ranging and there is another reason behind it. This effect is based on the speed of the sector’s globalisation. Today, a political decision in any part of the world or climate change can strike at the heart of any sector. Another problem is that in the Spanish fruit and vegetable growing sector, and I am not just talking about citrus fruits here, there is an obsession with the European market and any new competitor may cause a collapse on a market which, in general, is at near saturation point.

The flow of goods on a worldwide scale has increased and if we look at the trade war between China and the USA, we can see that during this campaign, there has been a drop in American orange sales to China. This fact generates a domino effect all over the world.

Valencian citrus fruits are in the midst of a crisis. Is there a trade opportunity for them in China or have other sources already overtaken us?

Of course Valencian citrus fruits still have opportunities in China, along with the entire fruit and vegetable growing sector; but not only in China, but throughout Asia as a whole, where there is an important demand for fruit and vegetables. India has almost the same amount of inhabitants as China, and it continues to grow. In Indonesia there are 300 million people and there are other smaller countries that together amount to around 2,000 million consumers.

Today, there is a scenario of highly competitive countries such as Peru, Chile, Egypt, Morocco and Turkey. They are very active and they are frequently at all the events, promoting their source. On the other hand, Spain is nowhere to be seen.

I also believe that there has been a complete lack of support from our politicians, who have not been capable of negotiating agreements in fair times and with feasible conditions.

Do you think that Spain is letting opportunities pass it by?

I don’t just think it, I am sure of it and I have seen it myself. For example, at China Fruit Logistica 2018, there was no representation by any Spanish citrus fruit company in spite of the fact that Spain has had an export protocol since 2005. On the other hand, an Italian consortium was promoting oranges from Valencia on a box with an Italian brand name on it. At another time, there was a producers’ presentation and the Egyptians were there, but there was only one Spanish exhibitor of mango and strawberry juices.

This is a symbol of a failure when opening up a market. The protocol was signed back in 2005 and it wasn’t until 2014 that significant quantities of Spanish oranges started being sent to China.

Furthermore, there is the commercial hypocrisy exercised by some companies, which at the same time as asking for border closures for South Africa, Egypt or Turkey within the EU, they are competing on the Chinese market buying Egyptian oranges to sell in China; without mentioning those who sell directly from South Africa to the Netherlands or Germany, competing with themselves.

Do you think we should call for protectionism for products made in the EU or are we clearly living in a globalised world and should adapt ourselves to these and other circumstances?

As I have already mentioned, we are living in a totally globalised world. Some Spanish producers have already shown this by reaching out from their usual environment and they are doing very well on their new markets.

Globalisation doesn’t mean that we all have to sell in China, India or Vietnam. A global market means that we have to understand and learn that now our competition is global.

I am going to be very categorical and many people won’t like what I am going to say, but this is how I feel and I will use the German market as an example, as I know it very well. If we look at what is happening on the German market, I can come to the conclusion that we haven’t made any effort to be competitive. Whilst the Peruvians, Chileans or Mexicans are organising trade missions, analysing the market and their clients, etc. and informing directly to the consumers, “many others have been at home, or have even been receiving grants from different places.”

In Germany, the perception of products coming from Spain has been lost. Communication with the consumers has never been worked on because there was no need for it. The Spanish have lived off of their received heritage, times when Spain had no competition from other countries.

We haven’t known how to invest in improvements, innovation or R&D, and this is taking its toll, because we have to compete with sources that have almost the same produce, at lower prices.

As someone with great knowledge of the fruit and vegetable market and important experience on the Chinese market, what is your opinion on these two questions? On the one hand, we are signing export agreements (the latest one is for grapes) and on the other hand, we are losing the opportunity to support the creation of the “Modern Silk Road”…

In Beijing, and as a member of the Expert Committee of the Xinfadi Agricultural College of which I form a part, we deal with this and other topics, and I assure you that I don’t understand this decision, which shows our country’s lack of international outlook.

On the one hand, we demand a greater number of protocols: for cherries, persimmons, berries…, and, on the other hand, we are shutting the door to future possibilities.

There are many ways and help for becoming international, such as Extenda and the ICEX, or private initiatives such as the one I represent with Eurofreshproduce.

In Spain, we have Mercedes-quality fruit and we must start to sell it like an official dealer and not like a second-hand car salesman, competing with the scrap yards. The most important idea is to get out there and develop a strong Spanish brand that helps Spanish producers.