The first potato to win the award 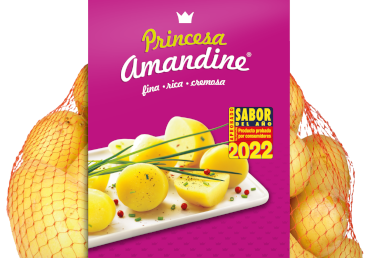 The success of the Amadine potato has been resounding. With just three years on the market, it has been recognised with one of the most important awards in the agribusiness.

In 2009 four companies got together to launch this new brand that was already well-known in France, the first supplier country for the Spanish market.

“We had to start from scratch on the Spanish market; there was nothing like it and now our goal has been reached, although we expect to continue growing, particularly through the regional chains because we are already present in the national supermarket chains,” Jean Michel Beranger, Manager of Princesa Amandine Ibérica explains.

From the business point of view, it is the first club of companies in the potato sector that markets and promotes this product. “This recognition, without any doubt, will benefit us in the consolidation of the project; we are the only brand that has the capacity to supply the same variety (Amandine) all year long. We have reached our goal because in Spain more potatoes are eaten in a healthy, low-calorie way: boiled or baked, in salads, as garnishes, mashed, as occurs in other European countries,” Beranger comments.

The brand has started up an important communication and marketing campaign, with appearances on regional television stations, in specialised press, with commercial promotions and actions at the point of sale. Its eye-catching image, with a pink packaging, has allowed it to stand out on the supermarket shelves.

In 2022, the partners have awarded production concession contracts for over 100 ha on the Iberian Mainland, divided up into regions: Andalusia (Seville), Castilla y Leon, Murcia (Cartagena) and Portugal (Silveira and Torres Vedras). The Spanish association has also taken on the commitment to supply France in the months when there are new Spanish potatoes, when there is no production there.

At present, the brand is investing in the creation of more sustainable packaging. “We expect to change our 400 g microwavable bag for a compostable cellulose, 100% plastic-free version, which meets the packaging regulations that will be applied in January, 2023. The packaging sector is highly developed in Spain and there are solutions, although the prices remain high,” Beranger indicates.